Pacific Rim posted a huge debut in China, posting a $45.2 million five-day opening. It is the highest premiere of a Warner Bros. release in the market and the second biggest opening for a non-Chinese film in 2013. The massive numbers coming from China allowed the film to cross the $200 million mark overseas before hitting the $100 million milestone in North America.

Fast & Furious 6 came in second place after its first full week in release. The action flick is the most successful entry in its franchise. Fast 6 has posted spectacular numbers in Russia in its ten days of release, adding $25.15 million throughout the week to reach a $54.84 million cume. Fast 6 is the second biggest of the year in the global box office, behind Iron Man 3. 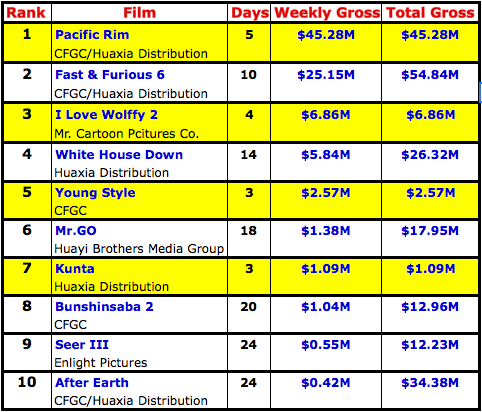