MEXICO: 'The Smurfs 2' Posts Another #1 Debut for Animated Films

A $4 million debut from The Smurfs 2 helped the animated film join a growing list of 2013 animated releases that have premiered atop the Mexican box office. The result is below the original's $5.7 million opening weekend in 2011. The Smurfs went on to gross $20.6 million in Mexico, forcing the sequel to present a consistent hold-over appeal to reach the same milestone. Now You See Me premiered in nearly half the screen count of Smurfs 2 over the weekend, bringing in $3 million from its debut. The film's $2,589 per-screen average makes the magic caper movie the biggest earner among individual theaters.

The new releases relegated The Wolverine to third place during its second weekend. The superhero film experienced a 52% drop, finishing the weekend with a $2.8 million tally and $12.5 million cume. Despicable Me 2 grossed over $1 million for the fifth consecutive week, a big feat that has contributed to an even bigger celebration at the box office for the Minions. Despicable Me 2 is currently posting a massive $45.4 million take from Mexico. 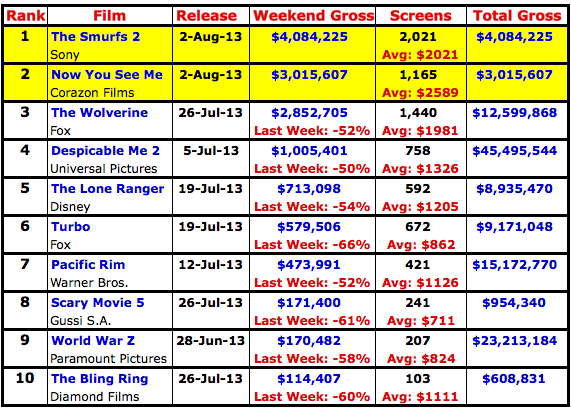 Tags: Mexico, The Smurfs 2, Now You See Me, The Wolverine, Despicable Me 2