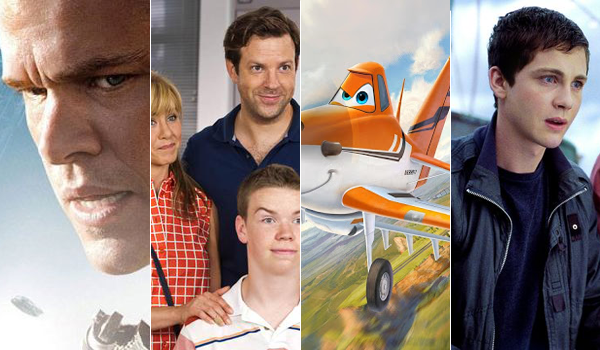 Sunday Update: Sony's Elysium took first place this weekend with an estimated $30.5 million. The Neill Blomkamp directed sci-fi film starring Matt Damon and Jodie Foster opened towards the lower end of expectations. The film's performance was quite similar to the $27.06 million start of 2 Guns last weekend, with the major difference being that Elysium was significantly more expensive than 2 Guns. Elysium debuted 18 percent below the $37.35 million break-out start of 2009's District 9, which was also directed by Blomkamp. Elysium continues the trend of original sci-fi films not being able to break out this summer domestically; as well as Sony's lackluster summer at the box office.

Elysium took in $11.0 million on Friday (which included an estimated $1.6 million from late night shows that began at 10 p.m. on Thursday) fell 2 percent on Saturday to take in $10.8 million and is estimated to fall 20 percent on Sunday to gross $8.6 million. That places the film's opening weekend to Friday ratio at 2.77 to 1, which is higher than the 2.64 to 1 ratio generated by District 9. Elysium received a so-so B rating on CinemaScore, which represented the lowest CinemaScore rating among this weekend's four new wide releases. The audience breakdown for Elysium skewed towards male moviegoers (61 percent) and slightly towards moviegoers under 30 (52 percent).

All things considered, Warner's We're the Millers clearly had this weekend's most impressive performance. The R-rated comedy starring Jennifer Aniston and Jason Sudeikis opened on the high end of expectations with an estimated second place take of $26.56 million. That brings the five-day start for the modestly budgeted film to a very healthy $38.04 million. The five-day start for We're the Millers was a tad higher than the $36.85 million five-day start of Tropic Thunder back in August of 2008. Given the daily holding pattern of We're the Millers thus far, it should only be a short matter of time before the film moves ahead of Elysium in the daily rankings.

We're the Millers had a five-day to three-day ratio of 1.43 to 1. The film's back-loading towards the weekend is a very good sign going forward; as are the film's A- rating on CinemaScore and the limited amount of comedies entering the marketplace over the next month. We're the Millers grossed $8.52 million on Friday, increased 21 percent on Saturday to take in $10.31 million and is estimated to fall 25 percent on Sunday to gross $7.73 million. The audience breakdown for We're the Millers was nearly evenly split between genders (51 percent male, 49 percent female) and skewed towards moviegoers over 25 (61 percent).

Disney's Planes debuted in third with an estimated $22.53 million. The DisneyToon Studios produced computer animated spin-off to the Cars franchise opened on the lower end of expectations. While Planes didn't deliver a Pixar-level debut, it wasn't expected to do so, given its nature as a non-Pixar release with a much more modest price tag. Planes opened 66 percent below the $66.14 million debut of 2011's Cars 2, but will have a strong chance of holding up better than Cars 2 did given the much smaller opening weekend rush out and the lack of any new computer animated films entering the marketplace until Sony's Cloudy with a Chance of Meatballs 2 debuts on September 27.

Planes was front-loaded this weekend with an estimated opening weekend to Friday ratio of 2.78 to 1, though it should be noted that family films in general were especially front-loaded towards Friday this weekend. The film opened with $8.11 million on Friday, was unchanged on Saturday with $8.11 million and is estimated to fall 22 percent on Sunday to take in $6.31 million. Planes earned a promising A- rating on CinemaScore. The audience breakdown for Planes was nearly evenly split between genders (51 percent male, 49 percent female) and skewed towards moviegoers under 25 (58 percent). Family audiences represented 85 percent of the film's total audience.

Among this weekend's four new wide releases, Fox's Percy Jackson: Sea of Monsters was off to the weakest start with an estimated fourth place take of $14.6 million. That brings the five-day total for the fantasy sequel to a soft $23.46 million. While Sea of Monsters had been widely expected to deliver the weekend's smallest debut, the film nonetheless opened below expectations. Sea of Monsters opened 13.5 percent below the $27.11 million five-day start of The Smurfs 2 last week and 42 percent below the $40.57 million five-day take of 2010's Percy Jackson and the Olympians: The Lightning Thief (which opened on a Friday).

Like Planes, Percy Jackson: Sea of Monsters will hope to hold up well going forward given the lack of new family options in the marketplace during the near future. However, that may be easier said than done given the early front-loading Sea of Monsters has displayed thus far; the film's five-day to three-day ratio was 1.61 to 1. The film received a B+ rating on CinemaScore.

In their respective second weekends of release, Universal's 2 Guns fell four spots and 59 percent to place in fifth with an estimated $11.13 million, while Sony's The Smurfs 2 was down three places and 46 percent to land in sixth with an estimated $9.5 million. Four new wide releases entering the marketplace clearly took a toll on both films and on holdovers in general. To date, 2 Guns has grossed a so-so $48.52 million in ten days and The Smurfs 2 has grossed a softer than expected $46.65 million in twelve days.

On the limited front, UTV's Chennai Express was off to a record-breaking start with an estimated $2.23 million from 196 locations. That represented the largest unadjusted three-day opening weekend ever for a Hindi language Bollywood release in North America. The previous high mark was the $1.94 million debut of 2010's My Name is Khan. Chennai Express earned a per-location average of $11,352 from 196 locations and has grossed $2.49 million through four days of release.

In its third weekend of release, Sony Pictures Classics' Blue Jasmine grossed an estimated $2.52 million. The Woody Allen directed film starring Cate Blanchett was up 36 percent over last weekend and earned a per-location average of $21,205 from 119 locations. In comparison, 2011's Midnight in Paris grossed $2.77 million from 147 locations in its third weekend of release. Blue Jasmine has grossed $6.22 million in 17 days, placing it 8.5 percent behind the $6.79 million 17-day take of Midnight in Paris.

Saturday Update: Sony reports that Elysium drew $11.2 million on Friday (including Thursday's $1.6 million advance shows). BoxOffice projects a $30.5 million weekend based on that figure, a decent if underwhelming number given the higher opening of Neill Blomkamp's District 9 four years ago. The film's Flixster score has been steadily declining (down to 74 percent currently)--not far above the middling 66 percent score from critics. After a summer filled with sci-fi flicks, and on a weekend with four new openers offering something for everyone, Elysium is a victim of market circumstance.

On the other hand, We're the Millers is taking advantage of the lull between R-rated comedies. With June's The Heat being the last from that genre to make a strong impression, adult crowds sent Millers to a very healthy $8.5 million Friday following its $11.5 million two-day start. While Friday's figure is a bit below early reports yesterday, BoxOffice projects it is on track for a strong $25.5 million three-day weekend and $37 million overall five-day start. Despite a poor critical reception, audiences are taking to Millers judging by the film's continued strong activity on Twitter and Facebook, as well its 80 percent approval rating on Flixster.

Disney's Planes started off relatively well on Friday with an estimated $8.1 million. At first glance, that pales in comparison to the usual numbers for Pixar (and even Disney) movies--then again, it's performing on par with recent kiddie flicks like Turbo and The Smurfs 2. That's a positive commentary for a film that nearly went direct-to-video and lacks any involvement from Pixar. Disney is certainly getting their money's worth out of the Cars franchise with this spin-off despite the film's putrid 23 percent score from Rotten Tomatoes critics. BoxOffice projects a $24 million opening weekend for Planes.

Percy Jackson: Sea of Monsters posted a more modest $4.9 million on Friday. That puts the film on track for a $15.3 million weekend and $24.2 million five-day debut. The sequel is under-performing in contrast to its predecessor--a common tale this summer, most recently experienced by last week's The Smurfs 2. With two high profile R-rated flicks topping the market this weekend, Fox was banking on the young adult crowd driving the Percy sequel. The film has maintained a strong presence on Twitter on Facebook throughout the week, but while tweens have been coming out, the film hasn't been able to expand beyond that core audience.

Friday Update #3: Sources tell BoxOffice that Elysium is heading toward an $11.5 million Friday, which should be enough to give it a $31+ million opening weekend. That's noticeably less than the $37.4 million enjoyed by 2009's District 9.

Planes is over-performing so far today with a projected $9 million Friday. The Cars spin-off could hit $27 million for the weekend, a great result for a film that wasn't originally planned for a theatrical release.

We're the Millers continues to shine with what looks to be a $9.5 million Friday. After strong results in its first two days (to the tune of $11.49 million) Millers is also targeting a $27 million three-day weekend, meaning a close race for second with Planes.

Fox's Percy Jackson: Sea of Monsters is looking more sluggish compared to other three new releases. The fantasy sequel may grab $5 million on Friday, setting it on a course of a $14-15 million three-day frame. Those numbers are far more modest than the original film which debuted to a $31.2 million three-day weekend in early 2010.

Check back tonight and Saturday morning for further updates on this weekend's releases.

Friday Update #2: Sources tell BoxOffice that Elysium took in a somewhat modest $1.6 million from Thursday night shows that began at 10pm. That tops the $1 million sneaks of After Earth and $1.1 million posted by Oblivion before summer.

Elysium has an uphill battle ahead of it as female interest in the film has been tracking low, meaning the young and old male audience will be driving the film.

Meanwhile, We're the Millers has gotten off to a strong start with an estimated $11.49 million in its first two days.

Percy Jackson: Sea of Monsters didn't hold up particularly well on Thursday, dropping roughly 38 percent from its Wednesday debut to $3.4 million on Thursday. Through two days, the sequel has grossed $8.86 million.

Percy will be aiming for a third or fourth place finish while Elysium, We're the Millers, and potentially even Planes all have legitimate shots at the weekend crown based on early performances.

Friday Update #1: Warner Bros. reports that We're the Millers added another estimated $4.707 million on Thursday, off 30.5 percent from its Wednesday debut. With an $11.49 million two-day start, the comedy is well-poised for a solid opening.

Thursday Update #1: We're the Millers brought in $6.78 million on Wednesday, according to Warner Bros. That figure includes the comedy's $1.7 million from Tuesday night shows. Depending on the film's Thursday staying power in the face of poor reviews, as well as Elysium's opening on Friday, the comedy is on pace for a $28-30 million haul over its first five days.

Meanwhile, Fox's Percy Jackson: Sea of Monsters brought in $5.45 million yesterday. That's a bit stronger than Tuesday's $853k sneaks indicated and puts the adventure film on a trajectory for a $30 million 5-day opening.

Wednesday: Warner Bros. reports that We're the Millers hauled a solid $1.7 million from Tuesday night shows that began at 8pm. That figure compares well against This Is the End's $2.2 million Tuesday night sneaks back in June. For additional comparison, The Heat grabbed $1 million, however, that film opened on Thursday evening.

Meanwhile, Fox's Percy Jackson: Sea of Monsters got off to a more mediocre start with an estimated $853,000 from Tuesday evening's debut. Comparisons are scant for Jackson with its late summer mid-week opening. That being said, and considering that the film is a sequel, Sea of Monsters should have at least been targeting the $1 million Thursday 9pm shows of After Earth earlier this summer.

Stay tuned to BoxOffice for further updates on this weeks openers, including Friday's Elysium and Planes.