UK: 'The Smurfs 2' Shares the Spotlight with 'The Heat' and 'The Conjuring' 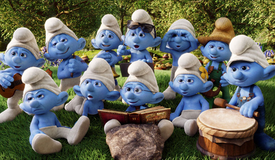 The Smurfs 2 finished the weekend atop the U.K. box office, reporting a $4.9 million tally at the end of its first week in release. The performance won't be reflected on the chart below, considering the film's mid-week release being responsible for the lion's share of the opening tally.

The Heat is a hit in the U.K. The comedy starring Melissa McCarthy and Sandra Bullock opened to $3.8 million. Director Paul Feig's previous collaboration with McCarthy, Bridesmaids, netted its biggest overseas performance from the United Kingdom with $37.3 million. McCarthy's Identity Thief posted a more modest $7.2 million from the U.K earlier this year. The Heat should finish its run somewhere around the $20 million mark, considering its opening weekend falls behind the $5.8 million Bridesmaids debut and ahead of the $2 million Identity Thief premiere.

The Conjuring scored the weekend's highest per-screen average, with an $8,888 average across its 377 locations. The thriller finished the weekend in second place with a $3.2 million debut. The Wolverine came in third after a 62% slide with a $2.7 million weekend that sees its cume raise to $14.6 million.    Animated hold-over are still reporting gains in the U.K. Monsters University closed out its fourth weekend with a $31.8 million total and Despicable Me 2 finished its sixth frame with a $58.3 million cume. 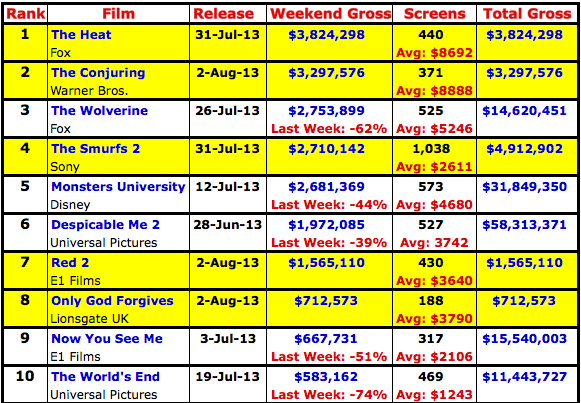 Tags: UK, The Heat, The Conjuring, The Smurfs 2, Monsters University, Despicable Me 2, The Wolverine