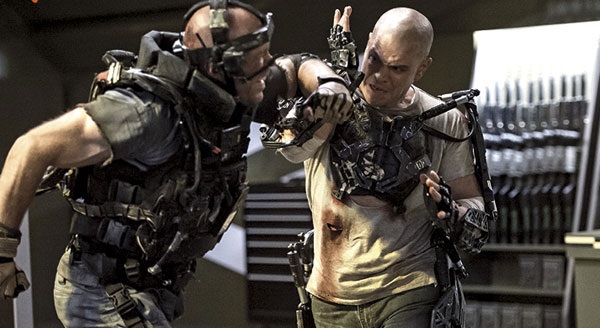 Elysium is getting a soft day-and-date roll-out from Sony, which will rely on a big performance from Neill Blomkamp's sci-fi spectacle to save face after a difficult summer. Sony has struggled with popcorn fare this summer, posting disappointing numbers across the majority of their global releases.

After Earth crash-landed in its North American debut and has currently grossed $60 million at the box office in the U.S. and Canada. The overseas numbers have helped M Night Shyamalan's film recover a bit of momentum, adding $184.2 million to take the film's global cume to $244 million. The overseas gross for After Earth compares to the $197 million from Tom Cruise's non-franchise sci-fi release, Oblivion.

Guillermo del Toro's Pacific Rim, the most recent non-franchise sci-fi flick to hit theaters, has also posted underwhelming numbers in North America but is currently the year's only film to surpass the $200 million mark overseas without the help of previous entries behind it. Pacific Rim should expect to add at least another $40 million to its overseas tally this weekend with a strong hold from China and releases in Spain, Japan, and Brazil.

Elysium might not give viewers the same high concept spectacle than del Toro's giant fighting robots, and is relying on a less bankable star, Matt Damon, than Oblivion's Tom Cruise or After Earth's Will Smith. Elysium director Neill Blomkamp turned heads in 2009 with District 9; the film earned $115 million in North America and $208 million worldwide from a novel idea and $63 million budget. Blomkamp's Elysium will need to post significantly higher numbers if the film is to be deemed a financial success. Elysium will open in around a dozen smaller overseas territories this weekend.

White House Down has been another fiasco for Sony. Roland Emmerich's second stab at destroying the White House has grossed $71.5 million in North America and $53.5 million overseas. White House Down still has a number of major markets on the horizon but will need a lot of help to reach $200 million globally.

Comedies are rarely big earners overseas, and while Grown Ups 2 and This is the End have posted respectable grosses in North America, neither of the films were expected to have important overseas runs. This is the End will turn a profit for the studio after a $96 million showing in North America and $13 million from a limited overseas release. The $271 million worldwide figure from the original Grown Ups film came mostly from North America, where it took in $162 million. The sequel is looking to finish its theatrical run with lower numbers; Grown Ups 2 has earned $116 million from North America and $22 million from a scaled overseas release.  Grown Ups 2 expands to the U.K., South Africa, Norway, Denmark, and Croatia this weekend.

The Smurfs 2 is set to join Grown Ups 2 as a Sony summer sequel expected to finish below its predecessor's numbers. The Smurfs sequel saw a wide release with little new competition last weekend, netting a $27 million debut from North America and $47 million overseas. The Smurfs 2 expands to the Middle East this weekend, hoping to pick up momentum before Disney begins to release Planes overseas on August 14.

Disney's The Lone Ranger is the weekend's only other wide expansion. The troubled Johnny Depp project will open in three major markets: France, Germany, and the United Kingdom. A handful of smaller territories makes it a dozen new countries for the action-adventure film. The expansion will finally help The Lone Ranger pass the $100 million mark overseas after ending last weekend with a paltry $88.7 million take outside of North America. The Lone Ranger promises to be the flop of the summer, currently reporting a $175.4 million global cume.

Tags: Elysium, After Earth, Pacific Rim, Grown Ups 2, This is the End, White House Down, The Smurfs 2, The Lone Ranger