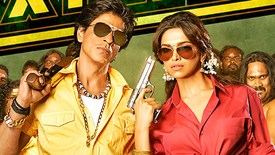 Chennai Express outperformed all but one film in the Indian market after a single day's performance. B.A. Pass, the week's other wide release, couldn't match the opening day strength of the Bollywood box office juggernaut.

Chennai Express will go down in history as the movie to reach 100 crores the quickest out of any movie to date. The previous record was held by Ek Tha Tiger (2012) which reached 100 crores in a mere five days. The film is sure to break more records as its popularity is continuing to skyrocket.