FRANCE: 'Lone Ranger' Premiere Takes Back Seat to 'Now You See Me' 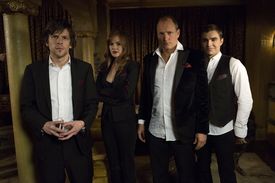 The Lone Ranger opened in second place with $3.7 million. It is the same debut posted by Johnny Depp's Charlie and the Chocolate Factory, which went on to gross a respectable $29.3 million in 2005. The weekend's other Hollywood premiere came from a limited roll-out by The Purge. The Ethan Hawke thriller took in $1.1 million from 192 screens, notching the second biggest per-screen average in the market with a $6,929 tally.

The Smurfs 2 rounded out a competitive top three, adding $3.4 million over its second weekend to raise its cumulative total to $8.8 million. The Wolverine fell short of a $2 million weekend in its third frame but was still able to break through the $15 million mark. Despicable Me 2 finished its seventh weekend in France with a $1.5 million take and $36.3 million cume. The Minions have more than doubled the take of Monsters University; the Pixar prequel has grossed $15.5 million over 5 weeks in release. 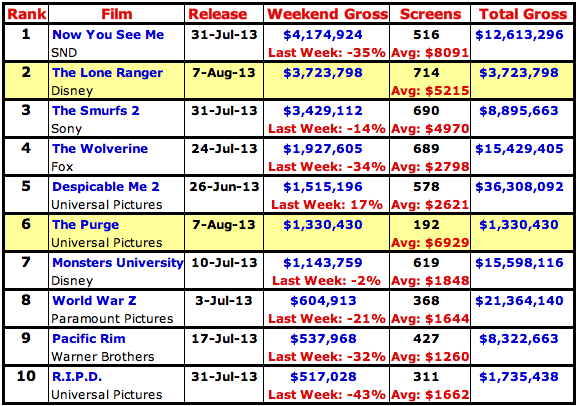 Tags: France, Now You See Me, The Lone Ranger, The Purge, The Smurfs 2, The Wolverine, Despicable Me 2, Monsters University