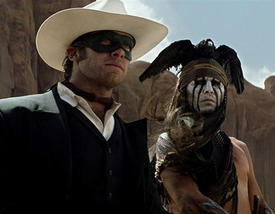 The Lone Ranger can at least claim a #1 opening in Germany in it attempts to salvage its global box office numbers. The action-adventure entry from Disney opened in 657 locations to a $3.6 million weekend, winning the per-screen category along the way with a $5,545 average.

The Smurfs 2 continued dominating the screen count in the country and brought in another $3 million in its second weekend. That's only a 1% drop for Sony's animated sequel, which has already grossed a total of $8.7 million. As far as animated sequel success goes, however, there is no better earner in the market than Despicable Me 2. The minions added $1.8 million over their sixth weekend in release, reaching a $30.3 million cume. That figure is more than twice the total of Monsters University; the Pixar prequel fell out of the top ten this weekend and is currently posting a $13 million total.

The Wolverine finished in fourth place with a $1.4 million take. The superhero spin-off has earned a total of $9.7 million in Germany. Grown Ups 2 celebrated its fourth weekend in Germany with a sturdy $1.2 million take. The comedy sequel has now grossed $10.1 million. This is the End opened to a $1 million take in a moderate 311 screens, scoring a competitive $3,321 per-screen average. 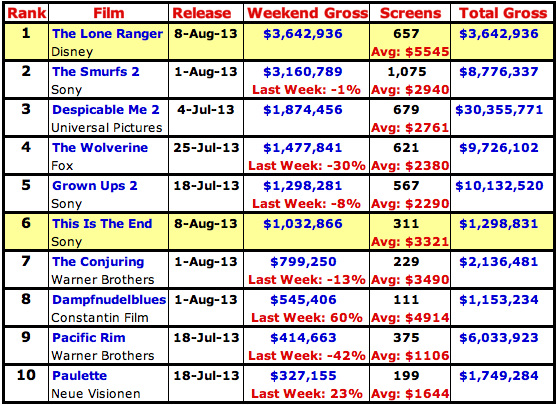 Tags: Germany, The Lone Ranger, The Smurfs 2, Despicable Me 2