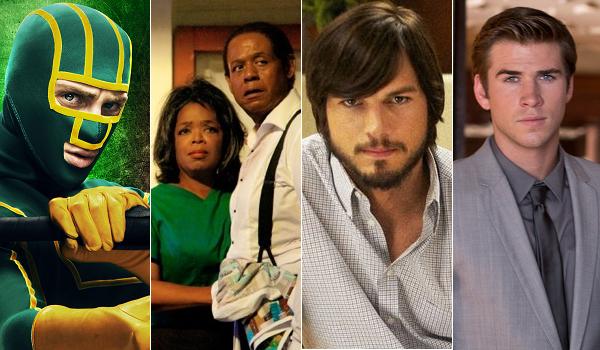 Sunday Update: Lee Daniels' The Butler led the way this weekend with a healthy estimated debut of $25.01 million. The early awards season hopeful from The Weinstein Company had been widely expected to find itself in a close race with Universal's Kick-Ass 2 for first place this weekend, but ultimately had no problem out-pacing the disappointing performance of Kick-Ass 2 in a very big way. Awards season buzz around the performances of Forest Whitaker and Oprah Winfrey, the title controversy surrounding the film and the lack of dramas in the marketplace this summer are all factors that helped The Butler exceed expectations this weekend. The Butler opened just 9 percent below the $27.49 million start of 42 earlier this year and is performing far stronger than 2009's Precious, which grossed $47.57 million during its entire run.

The Butler opened with $8.32 million on Friday, increased 12 percent on Saturday to take in $9.29 million and is estimated to fall 20 percent on Sunday to gross $7.40 million. That gives the film an estimated opening weekend to Friday ratio of 3.01 to 1. Like The Help back in August of 2011, The Butler will hope to hold up very well going forward with aid from both strong word of mouth and from skewing towards older moviegoers. The film's A rating on CinemaScore is an early positive sign going forward.

Speaking of strong word of mouth, Warner's We're the Millers held up very nicely this weekend with an estimated $17.78 million. The R-rated comedy starring Jennifer Aniston and Jason Sudeikis was down only 33 percent from last weekend and held steady in second place. We're the Millers has grossed $69.51 million in twelve days, a figure which is made even more impressive by the film's modest price tag for a high profile summer release. We're the Millers is running 6 percent ahead of the $65.84 million twelve-day take of 2008's Tropic Thunder, which means We're the Millers won't have any problem surpassing the $100 million domestic mark.

As mentioned, Kick-Ass 2 was off to a disappointing start this weekend. The superhero sequel starring Aaron Taylor-Johnson, Chloë Grace Moretz and Jim Carrey debuted with an estimated $13.57 million, which placed the film in fourth (just behind Sony's Elysium). That was well below pre-release expectations and was 32 percent softer than the $19.83 million start of 2010's Kick-Ass. While the original film was well liked by its niche audience, a sizable percentage of that audience ultimately wasn't interested in a second helping of the franchise. The one saving grace for Kick-Ass 2 is that with a reported production budget of $28 million, it was inexpensive for a superhero film.

While it is still early, the film's early holding power suggests that Kick-Ass 2 will be even more front-loaded than Kick-Ass was. Kick-Ass 2 opened with $5.9 million on Friday (which included an estimated $1.3 million from late night Thursday shows that began at 8 p.m.), fell a sharp 29 percent to gross $4.2 million on Saturday and is estimated to fall 17 percent on Sunday to take in $3.47 million. That places the estimated opening weekend to Friday ratio for Kick-Ass 2 at just 2.30 to 1; Kick-Ass had an opening weekend to Friday ratio of 2.59 to 1. Kick-Ass 2 received a B+ rating on CinemaScore.

The weekend's other two wide releases opened to even softer results. Open Road's Jobs took in an estimated $6.7 million to place in seventh, while Relativity's Paranoia debuted all the way down in 13th with an estimated start of just $3.5 million. The Ashton Kutcher led Jobs opened on the low end of its modest expectations, while Paranoia (which features Liam Hemsworth, Gary Oldman and Harrison Ford) delivered the smallest start of 2013 to date for a film debuting in more than 2,000 locations. Jobs opened with $2.61 million on Friday and had an estimated opening weekend to Friday ratio of 2.57 to 1, while Paranoia grossed $1.31 million on Friday and registered an estimated opening weekend to Friday ratio of 2.67 to 1. On top of their soft debuts at the box office, Jobs and Paranoia received respective lackluster B- and C+ ratings on CinemaScore. Both films obviously won't be sticking along for long in theatres.

Elysium, last weekend's top film, fell two spots and 54 percent to place in third this weekend with an estimated $13.6 million. The Neill Blomkamp directed sci-fi film starring Matt Damon and Jodie Foster has grossed $55.91 million through ten days of release. That places Elysium an underwhelming 23 percent behind the $72.80 million ten-day start of 2009's much less expensive District 9 (which fell 51 percent in its second weekend of release to gross $18.21 million).

Disney's Planes landed in fifth with an estimated $13.14 million. The DisneyToon Studios produced computer animated spin-off was down 41 percent and two places from last weekend's debut. Planes has grossed $45.09 million through ten days of release, which is solid given its modest price tag for a computer animated film. Planes is flying 60 percent ahead of the $28.26 million ten-day start of last year's ParaNorman (which fell 39 percent to gross $8.64 million during its second weekend of release).

Percy Jackson: Sea of Monsters took in an estimated $8.38 million to place in sixth. Fox's fantasy sequel was down 42 percent from last weekend. Sea of Monsters has grossed $38.90 million in twelve days of release, placing it a lackluster 35 percent behind the $60.13 million twelve-day start of 2010's Percy Jackson and the Olympians: The Lightning Thief.  Given the lack of new competition for family audiences in the near future, both Planes and Sea of Monsters will hope to hold up even better starting next weekend.

Saturday Update: The Weinstein Company reports this morning that Lee Daniels' The Butler accumulated an impressive $8.3 million on opening day yesterday. BoxOffice projects a $24.5 million opening weekend from that figure, an impressive debut for the drama. The recent glut of summer action movies worked in The Butler's favor as adult audiences grew ready for a more cerebral, character-driven film here in late August. Free publicity from the recent legal dispute over the film's title was a factor as well. Much like 2011's The Help, expect a leggy run for The Butler.

Universal's Kick-Ass 2 turned out a disappointing $5.8 million Friday opening--including the sequel's $1.3 million Thursday night gross. That's a strong indicator that the film's niche appeal will prevent any audience expansion over the weekend. The film's Flixster rating has already dropped below the first film's to 79 percent (and declining). With fans of the series having turned out, expect a weak hold for Kick-Ass 2 on Saturday as it heads toward BoxOffice's projected $15.3 million weekend--well under the $19.8 million debut of its 2010 predecessor.

Open Road's Jobs started off modestly with $2.6 million on Friday. The Ashton Kutcher-led biopic about Steve Jobs will take in around $7 million in its opening weekend. That figure appears tepid at first glance, but the low budget means the film still has a shot at profitability in the long run. Meanwhile, Jobs isn't winning over audiences: it carries a mere 52 percent approval rating from Flixster users after just one day in release.

Summer's latest bomb, Paranoia, grabbed a measly $1.3 million yesterday. The film starring Liam Hemsworth, Harrison Ford, and Gary Oldman couldn't turn its star power into a box office draw. Chalk that up partly to opening at the tail-end of one of the most crowded summer markets in recent memory. Additionally, the concept just didn't appeal to audiences and Liam--as the movie's main character--hasn't yet established the same kind of recognition that his brother Chris has. Paranoia currently has a disastrous 45 percent score from Flixster users and is on a trajectory for just $4 million this weekend.

Based on early grosses, it looks like The Butler will end up with $8.5 million on Friday and $25 million or so for the entire weekend. That's a strong start for The Weinstein Company release. The success of The Butler proves yet again that moviegoers can only stomach so many action films in one summer. An adult-skewing film with a great ensemble cast clearly feels like a breath of fresh air to a lot of movie fans. Expect The Butler to hold up well in the weeks to come.

Kick-Ass 2 may not even end up topping the $19.8 million debut haul of its predecessor. The vigilante flick looks to be on pace for $7 million on Friday and an $18.5 million opening weekend. Kick-Ass 2 follows The Wolverine and The Smurfs 2 as another franchise film that failed to live up to expectations. Moviegoers are obviously feeling some franchise fatigue, and it's showing at the box office. Don't expect to see a Kick-Ass 3 unless KA2 turn into a serious juggernaut overseas.

Despite being panned by many critics, Jobs is off to a respectable start. The tech biopic is on pace for $4 million on Friday and $11.5 million for the weekend. That's not a bad beginning for a film that cost less than $15 million to make. Jobs could also do well overseas thanks to the global popularity of the Apple brand. While it may be a punchline to some, the Ashton Kutcher vehichle should manage to be profitable for Open Road.

Paranoia can now be counted as one of Summer 2013's biggest duds. The combined star power of Liam Hemsworth, Harrison Ford, Gary Oldman and Amber Heard couldn't inspire interest in Relativity's tech thriller. Paranoia is on pace for a weak $1.8 million Friday and a $5.5 million debut frame.

Kick-Ass 2 currently has a mediocre 28% approval rating on Rotten Tomatoes, but early signs indicate that there may be a disconnect between critics and fans. Nearly 61,000 Flixster users have combined to push the action flick to a healthy 82% approval rating.

Open Road reports that Jobs took in only $425,000 from Thursday shows. That's a mediocre start for a film that may have a tough time hitting $10 million during its debut frame. Poor reviews--the tech biopic currently has a 25% approval rating--may keep away adults who normally would have flocked to the film after enduring a summer full of action flicks aimed at teens.

All signs point to a close race between Kick-Ass 2 and Lee Daniels' The Butler for first place this week. Stay tuned for more updates.

Thursday Update: Fandango reports that Lee Daniels' The Butler is the #1 ticket seller today, putting it ahead of high-profile newcomers Kick-Ass 2 and Jobs as well as strong holdovers such as Elysium and We're the Millers.

A survey of ticket buyers conducted by Fandango reveals the following:

· 82% were intrigued by word-of-mouth on Forest Whitaker's performance as The Butler;

· 72% say Oprah Winfrey's involvement (and co-starring role as Whitaker's wife) increased their interest in the film;