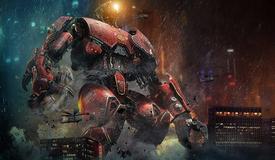 Pacific Rim has now grossed more in China than in North America. Guillermo del Toro's high concept tentpole has collected $103.1 million after 19 days in China. Pacific Rim had only grossed $86.4 million in North America over the same time-period, and it's total at home currently stands at $98.4 million after six weeks of release. China is keeping Pacific Rim relevant at the global box office, contributing the biggest numbers to its $384.4 million worldwide total.

Guillermo del Toro's sci-fi flickis such a big hit that it has overshadowed the highly anticipated release of Tiny Times 2, the sequel to the controversial blockbuster that hit screens earlier this summer. The Tiny Times sequel notched a $16.92 million take in its first full week of release, reaching an impressive $44.1 million total.

Fast & Furious 6 is still keeping itself relevant after a bountiful summer at the global box office. The latest entry in the Fast & Furious franchise added $2.75 million last week to take its Chinese cume to $65.89 million.

Next week's chart will have to account for the huge opening of the Jurassic Park 3D re-release in China. The reformatted edition of the Steven Spielberg modern classic took in $6.64 million in its opening day in China on Tuesday. That figure is the fourth highest opening day of the year for a U.S. release in the market, behind Iron Man 3 ($19.1M), Pacific Rim ($8.6M), and Fast 6 ($8.3M). Jurassic Park 3D posted a better opening day performance than Man of Steel ($6.2M) and The Hobbit ($5.6M). China has been a graceful home for 3D conversions of past hits, Titanic 3D opened to $11.2 million in 2010. Film Business Asia is reporting that the big opening comes from occupying one third of the market's screens, a factor that should equate to cuts in box office revenue across the board. 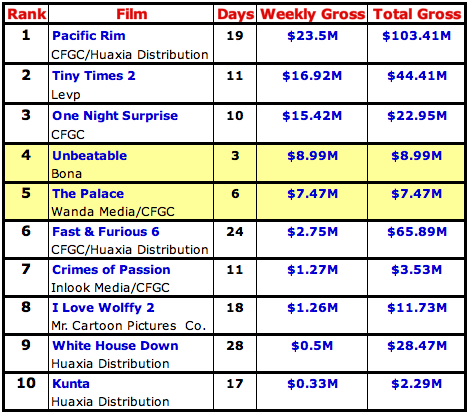