NORTH AMERICA: Studio Weekend Estimates: 'Lee Daniels' The Butler' with $17.0M and 'We're the Millers' with $13.5M Easily Outpace Newcomers 'The Mortal Instruments', 'The World's End' and 'You're Next' (6th Update) 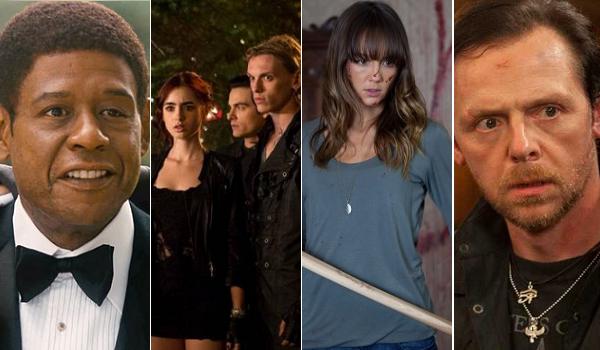 Sunday Update: Thanks in part to strong word of mouth, Lee Daniels' The Butler had no problem outpacing this weekend's lackluster wide releases to remain in first place. The awards season hopeful from The Weinstein Company starring Forest Whitaker and Oprah Winfrey grossed an estimated $17.02 million, which was down a very healthy 31 percent from last weekend. The Butler has grossed a strong $52.27 million through ten days of release. That places the film a slim 3 percent behind the $53.75 million ten-day start of 42 earlier this year (which fell 36 percent to gross $17.72 million in its second weekend of release). With the Labor Day holiday weekend around the corner, The Butler is set to move ahead of the pace of 42 come next weekend.

Also holding up very well this weekend was Warner's We're the Millers. The break-out comedy starring Jennifer Aniston and Jason Sudeikis was down only 25 percent from last weekend to remain in second place with an estimated $13.5 million. We're the Millers has grossed an impressive $91.74 million through 19 days of release, leaving it just $8.26 million away from reaching the $100 million mark. Thanks to even stronger holding power, We're the Millers is running 9 percent ahead of the $83.85 million 19-day take of 2008's Tropic Thunder. Like The Butler, We're the Millers should continue to hold up very well next weekend with aid from the Labor Day holiday frame.

This weekend's top wide release was Sony's The Mortal Instruments. However, the latest attempt at establishing a young adult franchise was arguably this weekend's most disappointing new wide release with an estimated third place take of $9.3 million. That places the five-day start for the Lily Collins led The Mortal Instruments at $14.05 million. On the heels of the disappointing performances of Beautiful Creatures and The Host earlier this year, audiences are once again indicating that they aren't ready for another potential young adult franchise at this point in time. The Mortal Instruments is running 22 percent ahead of the $11.49 million five-day start of Beautiful Creatures (which opened on a Thursday) and 24 percent behind the $18.57 million five-day start of 2010's Vampires Suck.

The Mortal Instruments did have a solid estimated opening weekend to Friday ratio of 2.98 to 1, though that ratio was obviously inflated from the Wednesday opening. The film's B+ CinemaScore rating was also solid. The audience breakdown for the film skewed heavily towards female moviegoers (68 percent) and a bit towards moviegoers over 21 (54 percent).

Focus' The World's End, the latest Edgar Wright directed comedy starring Simon Pegg and Nick Frost, debuted in fourth with an estimated $8.94 million. Of this weekend's new wide releases, The World's End came closest to opening in line with pre-release expectations. With a modest location count of 1,549, The World's End had a per-location average of $5,773, which represented the strongest per-location average of any film in wide release this weekend. Compared to previous films starring Pegg and Frost, The World's End opened 53 percent ahead of the $5.85 million start of 2007's Hot Fuzz (which opened in 825 locations) and 31 percent behind the $13.04 million debut of 2011's Paul (which opened in 2,802 locations).

The World's End was fairly front-loaded this weekend. After opening with $3.5 million on Friday, the film fell 11 percent on Saturday to take in $3.11 million and is estimated to fall 25 percent on Sunday to gross $2.33 million. That gives the film an estimated opening weekend to Friday ratio of 2.55 to 1. The film did earn an encouraging B+ rating on CinemaScore. The audience breakdown for The World's End skewed towards male moviegoers (58 percent) and towards moviegoers under 30 (54 percent).

You're Next debuted in seventh place with an estimated $7.05 million. Despite strong critical reviews and late August typically being a good time to unleash horror films at the box office, the low-budget Lionsgate release was unable to catch on with audiences this weekend and debuted below expectations. The film opened 17 percent below the $8.53 million start of 2011's Don't Be Afraid of the Dark. You're Next will hope that its strong reviews will help transfer into good holding power for its genre going forward, though a B- CinemaScore rating and an estimated opening weekend to Friday ratio of just 2.37 to 1 (after opening with $2.97 million on Friday) aren't strong early signs for the film.

Sony Pictures Classics' Blue Jasmine had a solid expansion this weekend with an estimated take of $4.3 million. Playing in 1,283 locations this weekend; The Woody Allen directed film starring Cate Blanchett earned a per-location average of $3,352 for the frame. While Blue Jasmine couldn't match the $5.83 million 2011's Midnight in Paris grossed when it expanded to 944 locations, it did outpace the $3.11 million last year's To Rome with Love grossed when it expanded to 806 locations. The 31-day total for Blue Jasmine stands at $14.69 million.

Holdovers Planes and Elysium took fifth and sixth places respectively with estimated grosses of $8.57 million and $7.1 million. Disney's Planes was down 36 percent from last weekend, while Elysium fell 48 percent. Respective 17-day totals stand at $59.59 million for Planes and at $69.05 million for Elysium; with Planes having the more impressive domestic performance of the two when taking costs and expectations into account.

Saturday Update #2: The World's End grabbed $3.5 million in its debut yesterday. Although that marks a bit of a drop from the $4.5 million opening day ($1,595 per theater) of Paul back in 2011, The World's End opened in 45 percent fewer theaters. A more reasonable comparison is 2007's Hot Fuzz, which earned $2.1 million in its first day (a $2,567 average). BoxOffice is projecting a $9.5 million weekend opening in third place for The World's End. The film's 91 percent Rotten Tomatoes rating makes it one of the best reviewed movies of the summer, although, that may not be carrying over to audiences: The World's End carries a 79 percent Flixster score so far--already behind Shaun of the Dead and Hot Fuzz. However, that does leave it ahead of Paul's 62 percent for now.

The Mortal Instruments: City of Bones added $3.1 million in its third day of release on Friday. Following underwhelming numbers on Wednesday and Thursday, the latest in a string of young adult-driven adaptations to disappoint has taken in $7.85 million so far and is heading for a $9.2 million three-day frame. Although critics lauded the film, Flixster users have given the flick a 77 percent approval rating so far. However, that's down about 19 percent from its anticipation level prior to release.

You're Next was unable to capitalize on its own positive reviews (receiving an 80% rating from critics--strong for its genre). The latest home invasion thriller looted $2.97 million on Friday and is headed for a $7.8 million opening frame. The film's Flixster score is currently sitting at 73 percent, although it remains to be seen how much lower that will drop. By comparison, The Purge ended up with an audience rating of 37 percent since its breakout opening in June. Although the crowded market is a big factor, audiences appear to burnt out on horror/thriller pics for now.

Woody Allen's Blue Jasmine showed some strength in its wide expansion to 1,283 theaters this weekend. The pic earned $1.16 million on Friday to boost its cume to $11.66 million. Adult audiences are clearly ready for some decidedly non-summer films as we head into the fall season. Blue Jasmine should accumulate $4.2 million this weekend.

Saturday Update: Lee Daniels' The Butler will repeat in the top spot this weekend. The Weinstein Company's drama pulled $4.785 million on Friday (representing just a 43 percent drop from its opening day last week). That gives the drama a $40.04 million domestic haul in its first eight days. BoxOffice projects the film will rake in a strong $16.5 million for its sophomore weekend.

Warner Bros.' We're the Millers continues to impress with its holding power at the end of summer's box office season. The comedy eased just 26 percent from last Friday to $4.02 million yesterday. Millers has tallied $82.26 million to-date and is on pace for a $13.3 million third weekend in second place ahead of all newcomers.

Friday Update #2: Sources tell BoxOffice that Lee Daniels' The Butler will easily stay #1 during its sophomore frame by adding another $15 million to its haul. A $15 million take would put The Butler at a little over $50 million after two weekends.

You're Next is looking at an $8.5 million debut.

Friday Update: Lionsgate reports that You're Next managed a solid $485K from Thursday evening shows. That's not too far off from the $525K Thursday haul of Lionsgate's Warm Bodies, which posted a strong $20.3 million debut frame this past February.

Summer 2013 has already spawned two horror successes--The Purge and The Conjuring--so there doesn't look to be room for a third, but You're Next should still manage a respectable debut.

Thursday Update: Sony reports that The Mortal Instruments: City of Bones will finish in first place on Wednesday with $3 million, but BoxOffice.com predicts that it won't be strong enough to topple Lee Daniels' The Butler this coming weekend. The teen-skewing flick is failing to tap into the same fervor that turned the Twilight franchise into a massive global phenomenon.

Critics are having fun ripping The Mortal Instruments apart, giving it a mediocre 17% approval rating on RottenTomatoes.com. The drama is performing much better on Flixster where it boasts a solid 81% approval rating from more than 19,000 users.

Two other 2013 releases--Beautiful Creatures and The Host--also tried and failed to become "the new Twilight." Beautiful Creatures made $2.5 million on its first day of domestic release this past February en route to a global theatrical haul of only $59 million. The Host, an adaptation of another novel by Twilight author Stephenie Meyer, manged $5.3 million in North America on opening day in March. Open Road's sci-fi romance finished with $63 million globally. It looks the combination of supernatural elements and young love has run its course for the time being.

Tags: The Mortal Instruments: City of Bones, Lee Daniels' The Butler, You're Next, The World's End