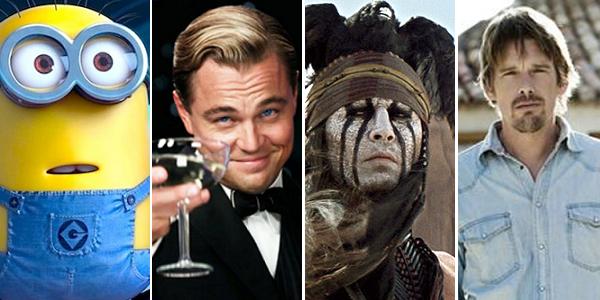 As Summer 2013 comes to close, we wanted to sum everything up in an unconventional manner. It seems fitting for a summer that has been full of highs, lows and plenty of surprises. Hollywood's busiest season is always fascinating to watch, and this season was certainly no exception. We've decided to hand out some fake awards in order to remember some of the summer's biggest stories:

The "Hey, We Don't Need Superheroes!" Award goes to:

Despicable Me 2 and Fast & Furious 6 have combined for nearly $1.6 billion globally. The Purge turned into a nice, low-budget hit with $84 million in global receipts. What do all three films have in common? That's easy: there are no superheroes in any of them. As purveyors of snark continue to complain about Hollywood's reliance on superheroes, Universal proved this summer that banking on caped crusaders is not essential to having a successful slate. Moviegoers crave diversity at multiplexes, and Universal succeeded by giving them just that. It's funny that one of Universal's biggest disappointments this year--behind the R.I.P.D. disaster, of course--is Kick-Ass 2, a dark comedy about teenagers trying to be superheroes.

The "Counter-Programming Really Does Pay Off" Award goes to:

Traditional wisdom says that The Great Gatsby should not have earned $330 million+ globally. The Warner Bros. release opened in between Iron Man 3 and Star Trek Into Darkness--a daunting task for any film, let alone a stylized take on a popular novel with a depressing ending. Luckily for WB, traditional wisdom isn't always right. The Great Gatsby's staggering $50.1 million opening weekend in North America proved that audiences were hungry for a film that didn't rely on explosions and fight sequences that seem to go on forever. A large percentage of the moviegoing population (read: adults who don't care about sci-fi and action films) is neglected during the summer. When Hollywood pays attention to that crowd, the rewards are palpable.

The "Movie That Failed Because Of Another Movie" Award goes to:

The pairing of two reliable draws--Channing Tatum and Jamie Foxx--with Roland Emmerich, a director who knows how to deliver big-budget action extravaganzas that succeed at the box office, should have been led to a massive hit. The problem? Well, White House Down's story about POTUS' abode being invaded was way too similar to Olympus Has Fallen, a sleeper hit that has earned $161 million globally since opening in March. Take Olympus Has Fallen out of the picture and chances are WHD would be lumped in the same conversation with some of the summer's biggest hits. Instead, we lament its underwhelming $131 million global tally.

The "Movie That Succeeded Because Of Another Movie" Award goes to:

Sure, Iron Man 3 would have been massive even without Marvel's The Avengers, but we're pretty confident that success of The Avengers is what helped catapult IM3 to the rarefied $1 billion global plateau. The brand building that Disney/Marvel have accomplished is truly staggering. Keep a very close eye on Thor: The Dark World this November.

The "It's Really Important To Know Who Your Audience Is" Award goes to:

Who exactly was The Lone Ranger made for? The Disney release proved to be too violent for young children, and it was too hip and edgy for people who enjoyed the classic television show it was based on. Oh, and it opened against Despicable Me 2, a film that did a much better job of appealing to families. The Lone Ranger is one of the biggest duds of all time because it tried to have a little bit of something for everyone, but instead ended up pleasing very few.

The "Hey, there are other weekends in the year to release a movie during!" Award goes to:

One of the main reasons that films bomb in the summer is the amount of competition that exists. Studio cram tentpoles into a very short period of time and there's often not enough room for them all to succeed. We strongly believe that The Hangover Part III and Turbo would have done much better had they opened outside of the summer season. The Hangover Part III was plagued by negative reviews, but it was really hurt by opening on the same weekend as Fast & Furious 6. As for Turbo, it came right after families had just enthusiastic forked out cash to see Monsters University and Despicable Me 2.

The "One For Them, One For Me" Award goes to:

"One for them, one for me" is the business strategy that many successful actors employ. This summer, Ethan Hawke proved that it can really pay off by starring in two wildly different hits. He anchored The Purge, a solid horror hit that was able to beat out The Internship during its opening frame, and Before Midnight, a critical darling that provided a breath of fresh air for patrons who craved a serious film about the perils of a long-term relationship.

The "Oscar Contenders Can Make Serious Dough In The Summer" Award Goes To:

You can love him or you can hate him, but nobody is better at maximizing the potential of prestige pics than Harvey Weinstein. This summer, The Weinstein Company helped Fruitvale Station and Lee Daniels' The Butler compete in a market full of expensive action films. That's a commendable achievement.