NORTH AMERICA: 4-Day Estimates: 'The Butler' Moves into First with $20.0M; After Leading 3-Day Frame 'One Direction: This Is Us' Slides to Second for the 4-Day with $18.0M; 'Instructions Not Included' A Major Surprise with $10.0M (6th Update) 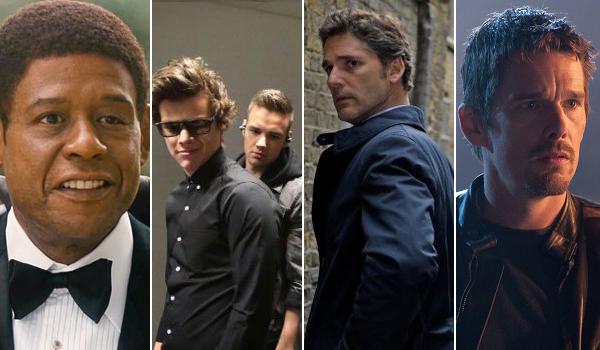 Monday Update: After placing in a close second for the three-day frame with $14.88 million, Lee Daniels' The Butler is estimated to lead the four-day holiday frame with $20.01 million. The four-day take for the awards season hopeful from The Weinstein Company was up a strong 21 percent over last weekend's three-day take. The Butler has grossed $79.28 million through 18 days of release and is now running 13.5 percent ahead of the $69.82 million 18-day take of 42 earlier this year. Thanks to continued strong holding power, it will only be a matter of time before The Butler surpasses the $100 million domestic milestone.

Sony's One Direction: This Is Us continued to display early massive front-loading on Sunday. As a result, the film's three-day take ultimately came in below earlier estimates at $15.8 million. While that was enough to hold onto first place for the three-day frame, the film's four-day estimate of $18.0 million places it in second for the long weekend. The four-day take of This Is Us was 42 percent softer than the $31.27 million four-day haul of 2011's Justin Bieber: Never Say Never and 39 percent stronger than the $12.97 million four-day start of 2009's Jonas Brothers: The 3D Concert Experience. While One Direction: This Is Us opened towards the lower end of expectations this weekend, the film's front-loading towards Friday's performance obviously isn't a good sign going forward.

We're the Millers placed in third this weekend with respective estimated three-day and four-day takes of $12.68 million and $15.93 million. The four-day take for the Warner Bros. comedy was up a terrific 22 percent over last weekend. We're the Millers surpassed the $100 million mark on Friday and has now grossed $112.88 million through 27 days of release.

Lionsgate's Instructions Not Included continued to surprise in a big way on Sunday. The three-day take for the Eugenio Derbez comedy vehicle from Pantelion Films came in at $7.84 million, which exceeded Sunday's studio estimate. The film will finish in fifth for the four-day frame with an estimated $10.0 million. Playing in a modest 347 locations; Instructions Not Included earned a tremendous four-day per-location average of $28,818. Instructions Not Included received an A+ rating on CinemaScore and held up very well throughout the weekend; both of which are strong early signs for the film going forward. Lionsgate will expand the film into additional locations next weekend.

Meanwhile, the weekend's other major releases failed to make much noise. Warner's Getaway opened below its already modest expectations with a tenth place estimated four-day take of $5.53 million (from 2,130 locations). Focus' Closed Circuit grossed an estimated $3.14 million for the four-day frame (from 870 locations), which brings the film's six-day start to a soft $3.65 million. The Weinstein Company's The Grandmaster took in an estimated $3.12 million in four days (from 749 locations), bringing the film's eleven-day total gross to $3.32 million. Respective four-day per-location averages were $2,596 for Getaway, $3,607 for Closed Circuit and $4,168 for The Grandmaster.

Sunday Update: Sony's One Direction: This Is Us led the way this weekend with an estimated $17.0 million over the three-day frame. Sony's four-day estimate for the 3D concert documentary stands at $20.5 million, which places it in a tight race for first over the four-day frame with Lee Daniels' The Butler. Compared to previous concert documentaries, the three-day start of One Direction: This Is Us was 42 percent below the $29.51 million opening weekend take of 2011's Justin Bieber: Never Say Never and 36 percent ahead of the $12.51 million start of 2009's Jonas Brothers: The 3D Concert Experience.

Due to their fan-driven nature, concert documentaries tend to be very front-loaded and One Direction: This Is Us clearly fit into that mold this weekend. After grossing $8.86 million on Friday (which included an estimated $2.7 million from late night Thursday shows), This Is Us fell a massive 54 percent on Saturday to take in $4.04 million and is estimated to increase slightly on Sunday to gross $4.1 million. That places the film's estimated three-day opening weekend to Friday ratio at 1.92 to 1.

This Is Us received a strong A rating on CinemaScore, which indicates that One Direction fans are liking the film in general, but that rating likely won't help the film's long-term prospects much given the extent of the film's early front-loading. The audience breakdown for One Direction: This Is Us skewed heavily towards female moviegoers (87 percent) and moviegoers under 17 (65 percent).

After topping the box office each of the past two weekends, Lee Daniels' The Butler fell one spot to take second place over the three-day frame with an estimated $14.74 million. The awards season hopeful from The Weinstein Company was down a slim 11 percent from last weekend, as the film benefited from continued strong word of mouth and from the Labor Day holiday this weekend. BoxOffice is currently projecting that The Butler will gross $20.0 million for the four-day weekend, which as mentioned, will place it in a tight race for first with One Direction: This Is Us over the four-day frame. With a strong $74.01 million 17-day total through Sunday, The Butler is currently running 7 percent ahead of the $69.01 million 17-day take of 42 earlier this year.

Warner's We're the Millers also continued to hold up nicely this weekend. The break-out comedy starring Jennifer Aniston and Jason Sudeikis was down one spot and only 3 percent from last weekend to place in third with an estimated $12.61 million. In the process, We're the Millers surpassed the $100 million domestic mark this weekend (on Friday, the film's 24th day of release). The 26-day total for We're the Millers stands at an impressive $109.56 million. BoxOffice is estimating that We're the Millers will take in $16.2 million for the four-day weekend.

In a major surprise, Lionsgate's Instructions Not Included delivered the weekend's second largest debut with a fifth place estimated three-day start of $7.5 million. The Eugenio Derbez comedy vehicle from Pantelion Films earned a tremendous three-day per-location average of $21,614 from a modest 347 locations. Instructions Not Included registered the largest opening weekend ever for a Pantelion Films release, as it easily topped the $2.29 million debut of last year's Casa de mi Padre; and furthermore, is already the highest grossing film ever for Pantelion. Lionsgate's four-day estimate for the film is $9.3 million. Instructions Not Included received an A+ rating on CinemaScore and boasts an estimated opening weekend to Friday ratio of 3.90 to 1; both of which are strong early signs for the film going forward.

Warner's Getaway opened below its already modest expectations with a ninth place estimated three-day start of $4.51 million. The action crime film starring Ethan Hawke and Selena Gomez averaged a very soft $2,115 from 2,130 locations. The opening weekend take of Getaway came in below the $4.86 million grossed by Spring Breakers during its first weekend of wide release (in 1,104 locations) earlier this year. BoxOffice is projecting a $5.6 million four-day start for Getaway. The film received a lackluster C+ rating on CinemaScore.

In moderate release, Focus' Closed Circuit and The Weinstein Company's The Grandmaster took in similar three-day grosses of $2.54 million and $2.45 million. While neither film made much noise this weekend, both films were able to claim higher per-location averages for the weekend than Getaway did. BoxOffice is currently projecting respective four-day takes of $3.25 million for Closed Circuit and $3.05 million for The Grandmaster.

Saturday Update: Official studio estimates for Friday are in, and One Direction: This Is Us claimed first place for the day with $8.9 million. That figure includes $2.7 million from Thursday night shows. The film lagged behind Justin Bieber: Never Say Never's $12.4 million opening day in February 2011, but still performed much stronger than the $4.96 million first day take of 2009's Jonas Brothers: The 3D Concert Experience. The One Direction flick's positive critical reception is also carrying over: its Flixster user score has increased to 79 percent (from a mid-60s anticipation level)--indicating positive word of mouth among the limited target audience. Domestically, This Is Us should pull in $21 million through Sunday and $25 million for the four-day weekend. BoxOffice projects a first place finish for both frames.

Lee Daniels' The Butler is projected to take second place for the holiday frame. Down just over 24 percent from last Friday, the word-of-mouth hit drama grabbed $3.62 million yesterday as it heads for $14.5 million over the three-day weekend and $19.5 million for the four-day frame.

Meanwhile, Getaway failed to gain traction in its debut. Audiences sent the thriller to a disappointing $1.42 million on Friday. Despite trying to bring in crowds young and old with Ethan Hawke and Selena Gomez in starring roles, moviegoers are clearly signaling that they're burnt out on action flicks right now. With a low 53 percent Flixster user approval rating, a long run seems to be off the table. BoxOffice projects Getaway will take in $4.4 million through Sunday and $5.4 million by the end of Labor Day.

On to more encouraging news, Lionsgate's Instructions Not Included earns the "surprise of the weekend" award thanks to a strong $1.925 million opening day from just 347 locations. The dramedy, led by popular Mexican comedian Eugenio Derbez, is proving to be a welcomed offering for Latino audiences over the holiday weekend. BoxOffice is projecting an impressive $5.5 million three-day weekend and $6.8 million four-day frame.

The Grandmaster is set to bring in $2.3 million through Sunday and $2.85 million over the four-day weekend. The Weinstein Company's release expanded into 749 theaters yesterday.

Friday Update #2: Sources tell BoxOffice that One Direction: This Is Us looks to be on pace for $18 million or so over the four-day holiday frame based on early Friday grosses. That's a solid start for the concert flick even though it won't match the $29 million tally Justin Bieber: Never Say Never managed over three days during its North American debut. This Is Us could have the last laugh though if it performs well overseas--a healthy haul in the UK is a given based on the band's origins--and ends up topping Never Say Never's $98.6 million global total.

The Butler is looking like it will be #2. Official numbers are due tomorrow morning from The Weinstein Company.

Newcomers Getaway and Closed Circuit are looking anemic. Even though critics are ripping it shreds, Getaway looks poised to perform better over the four day frame with around $5 million. Closed Circuit should take in $4.3 million or so over the next four days.

Friday Update: Sony reports that One Direction: This Is Us snagged $2.7 million from Thursday evening shows starting at 7 p.m. That's an impressive start considering that many teens are now back in school.

Thursday Update: Fandango reports that One Direction: This Is Us leads daily ticket sales with an impressive 68% market share. To be fair, the teen-skewing flick won't face a whole lot of serious competition from other new films during the extended holiday frame. BoxOffice.com forecasts that fellow newcomers Closed Circuit and Getaway will come in under $10 million over four days. Closed Circuit posted only $248,704 on Wednesday, a weak start for a film that distributor Focus clearly doesn't have a lot of faith in. It'll be a close race between the boy band doc and Lee Daniels' The Butler for first place. We're the Millers is also still going strong.

According to a Fandango survey of more than 1,000 One Direction ticket-buyers:

· 87% watched One Direction win at the Video Music Awards on MTV;

· The majority surveyed said Harry Styles is their favorite One Direction member, with Niall Horan a close second.

Tags: One Direction: This Is Us, Lee Daniels' The Butler, Closed Circuit, Getaway