GLOBAL: 'One Direction: This is Us' Sings its Way to $33.1M Debut; 'Conjuring' and 'Monsters' Hit Milestones; Superman Settles for Second in Japan 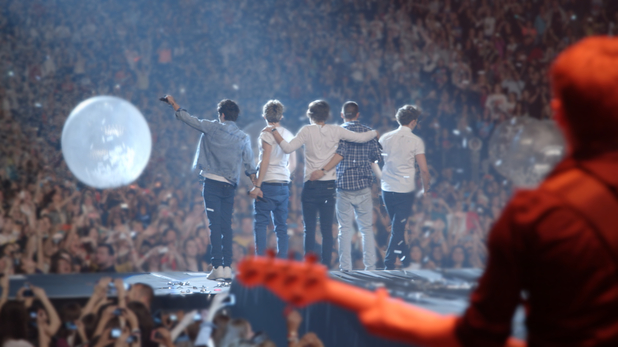 One Direction: This is Us had a strong debut for a concert film. The 1D concert movie opened day-and-date in 53 markets, outgrossing Justin Bieber: Never Say Never by 125% in the same territories. One: Direction This is Us finished the weekend with a $14.5 million overseas tally and $33.1 million global gross.

The U.K. was friendly to its pop darlings with a $5.7 million #1 opening on 650 screens, representing the film's best overseas showing in its first frame. This is Us posted a 16% improvement above the Hannah Montana movie debut and a 3% bump over Never Say Never's lifetime cume in the market.

A region-by-region breakdown provided by Sony paints a clearer picture on the film's success:

The big debut wasn't enough for One Direction to overtake another Sony release in the overseas box office. Elysium came through with a $17.1 million weekend outside of North America after two #1 debuts in top markets.

Elysium opened in first place in South Korea with a strong $5 million bow on 361 screens. It was an 18% improvement over the Oblivion premiere in the market and more than twice the opening gross of director Neill Blomkamp's District 9 in the market. Elysium took first place in its Italian debut as well, reporting a $2 million performance across 452 screens. The Italian victory for the sci-fi film represents a 38% improvement over Oblivion's Italian debut and a 10% raise above the Pacific Rim premiere in the same market.

Monsters University became the fourth Disney/Pixar release to cross the $700 million global mark on August 29. The prequel joined an elite list of releases that include Toy Story 3 ($1.063B), Finding Nemo ($922M), and Up ($731M). It became Disney's biggest animated release in China after surpassing Toy Story 3 with a $27.8 million cume in the market. Monsters University has grossed a total of $715.1 million worldwide, with $450.9 million of that figure coming from outside of North America. The top overseas market for the film continues to be Japan with a whopping $87.4 million. The film's last remaining market is South Korea, where it will open on September 12.

The Conjuring crossed the $100 million mark overseas this weekend, reaching an impressive $109.5 million cume after 41 markets combined for $12.1 million. The worldwide total for The Conjuring stands at $243.3 million. The Conjuring backed up last weekend's #1 showing Mexico, where it posted the biggest opening for a horror film of all time, with a 3% drop that accounts for a $4.2 million hold to retain the top spot. The film's Mexican total is $11.2 million. Other top markets for The Conjuring include the U.K. ($15.2M), Russia ($10M), Australia ($7.9M), and Spain ($7.6M).

Despicable Me 2 added another $6.5 million to its growing overseas tally this weekend. The Minions reached an overseas cume of $467.5 million, including a $3.3 million hold in its third frame in Russia ($28.8M Cume) to become the highest animated release of the year in the market. Despicable Me 2 ranks behind Iron Man 3 and Fast 6 as the third biggest film of the year in Russia. Despicable Me 2 will add to its current $823.1 million global total with the addition of eight more territories in the coming months. South Korea is the next major release on September 12.Jurassic Park 3D has become a very profitable endeavor for Universal. The re-release of the Spielberg dinosaur flick has taken in $108.9 million worldwide, thanks in large part to a $47.2 million performance after thirteen days in China. Two weeks in China represent the bulk of the film's $63.5 million overseas gross. Jurassic Park 3D has four more territories left on its calendar.

The Wolverine is slashing its way toward the $250 million overseas mark. It will need a solid performance from Japan, where the film is set, to take its current $232 million overseas total to the new milestone. The Wolverine opens in Japan on September 13. The film has grossed $359.8 million worldwide.

Planes added two top markets to its scaled overseas release this weekend. The Disneytoons film opened in Russia to $2.1 million and took in $1.9 million from its German debut. Planes is currently in release in 25 territories and has grossed a total of $31.2 million outside of North America. The global cume is $105 million. The film is set to open in Lebanon, Singapore, Indonesia, Argentina, Uruguay, and Paraguay next weekend.

Pain and Gain was shelved for a wide overseas roll-out until the end of the packed summer season and has been hitting screens around the world over the last several weeks. Michael Bay's black comedy reached a $20.9 million overseas cume after posting a $1.5 million debut across 393 locations in teh U.K. and a $1.3 million hold in its second weekend in Germany ($4.7M Cume). Pain and Gain opens in Belgium, Denmark, Panama, and Taiwan next weekend.

Pacific Rim is still gaining ground overseas, reaching a $304.4 million total outside of North America that is propelled by a massive $108.6 million cume from China. Pacific Rim has grossed less in North America than China, where it was unable to cross the $100 million mark in the U.S. and Canada until this weekend.

World War Z continues to gain ground overseas. The zombie thriller has now grossed a worldwide total of $532.1 million, with $331.6 million of that figure coming from outside of North America.

A $1.1 million hold in its second weekend in Japan ($6.9M Cume) gave Star Trek Into Darkness a modest boost as it closes out its theatrical run. The sci-fi sequel has taken in a total of $234 million overseas and is reporting a $462.4 million global total.

The Lone Ranger will need a boost from its Chinese release on October 6 if it hopes to reach the $250 million global mark. The critically-panned Western has grossed a total of $150.7 million overseas and is reporting a $239.2 million global cume.

Kick-Ass 2 reached a $23.3 million overseas total from 39 territories. The film opened in five territories this weekend, including disappointing bows in Spain ($311k in 274 locations) and Portugal ($35k in 34 locations). The super-hero sequel has grossed a total of $50.1 million worldwide. Kick-Ass 2 opens in Russia on September 5, with twenty additional territories to follow in the coming weeks.

Percy Jackson: Sea of Monsters continues to do well overseas after finishing the weekend with an $11.4 million tally from 48 markets to take its overseas cume to $82.6 million. The film's global total is $137.5 million.

The Heat reached a $58 million overseas cume to take its global to $215.2 million.