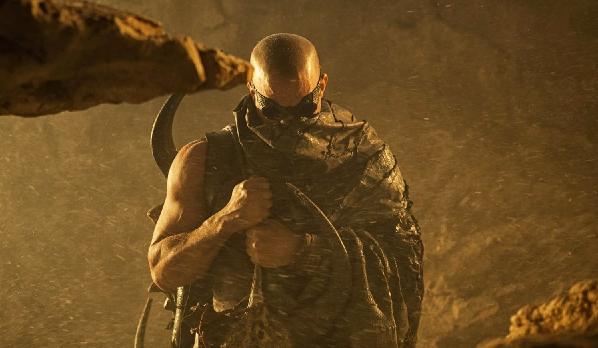 Sunday Update: As was widely expected, Universal's Riddick debuted in first place this weekend with an estimated $18.67 million. However, the third installment of the Vin Diesel led sci-fi franchise did open below expectations (which tended to range from $20 million to $25 million). Riddick also opened below the $24.29 million start of 2004's The Chronicles of Riddick (which stands at $31.92 million when adjusting for ticket price inflation). With that said, it should also be noted that with a reported production budget of $38 million, Riddick was far less expensive than The Chronicles of Riddick. Riddick did outpace the $11.58 million three-day start of 2000's Pitch Black (which stands at $17.53 million when adjusting for inflation); though Riddick is highly likely to be significantly more front-loaded than Pitch Black was.

Riddick took in $7.3 million on Friday (which included an estimated $900,000 from late night shows that began at 8 p.m. on Thursday), fell 1 percent on Saturday to gross $7.2 million and is estimated to fall 42 percent on Sunday to gross $4.17 million. That places the film's estimated opening weekend to Friday ratio at 2.56 to 1. The audience breakdown for Riddick skewed towards male moviegoers (59 percent) and moviegoers over 30 (53 percent). The film received a modest B rating on CinemaScore. That isn't a very promising sign going forward; nor is the upcoming competition the film will face from the release of FilmDistrict's highly anticipated Insidious Chapter 2 next weekend.

After leading the box office for each of the past three weekends, Lee Daniels' The Butler fell to second place this weekend with an estimated $8.90 million. The early awards season hopeful from The Weinstein Company starring Forest Whitaker and Oprah Winfrey was down a respectable 40 percent from last weekend's three-day frame. The Butler has grossed an impressive $91.90 million through 24 days of release; leaving the film just $8.10 million away from reaching the $100 million domestic milestone.

Lionsgate's Instructions Not Included held up very nicely this weekend with an estimated third place take of $8.1 million. The low-budget Eugenio Derbez comedy vehicle from Pantelion films was up 3 percent over last weekend's surprise debut. Strong word of mouth (the film received an A+ rating on CinemaScore) and expanding into an additional 369 locations this weekend both helped out the film in a big way. Instructions Not Included continued to claim the highest per-location average in the top 10, as it averaged $11,297 from 717 locations. The film took in $1.64 million on Friday, jumped 102 percent to take in $3.32 million on Saturday and is estimated to fall 5 percent on Sunday to gross $3.14 million. Instructions Not Included has grossed $20.31 million through ten days of release and has a very strong chance of continuing to hold up well going forward.

We're the Millers took in an estimated $7.93 million to place in fourth. Warner's break-out comedy starring Jennifer Aniston and Jason Sudeikis was down 38 percent from last weekend, which represents a healthy post-Labor Day weekend hold. With a $123.84 million 33-day take, We're the Millers has now out-grossed the $117.54 million total gross of 2011's Horrible Bosses and continues to pad its status as one of the larger surprise hits of this summer.

Disney's Planes claimed fifth place this weekend with an estimated $4.27 million. The modestly budgeted computer animated film was down 45 percent and has now grossed $79.28 million in 31 days. Planes continues to benefit from the lack of new competition for family audiences and will continue to do so until Sony's Cloudy with a Chance of Meatballs 2 is released on September 27.

Meanwhile, Sony's One Direction: This Is Us was down a massive 74 percent to land in sixth with an estimated $4.1 million. After a strong opening day performance last weekend, the 3D concert documentary has remained largely in free fall since then. With that said, One Direction: This Is Us has still grossed a solid $23.99 million in ten days. That places the film 42 percent ahead of the $16.84 million ten-day start of 2009's Jonas Brothers: The 3D Concert Experience, but 50 percent behind the $48.18 million ten-day take of 2011's Justin Bieber: Never Say Never.

Saturday Update: Universal reports Riddick grabbed $7.3 million on Friday, lower than initial estimates had suggested would be possible earlier on Friday. The opening day figure for Vin Diesel's sequel was down a noticeable 26 percent from the $9.9 million first day take of 2004's The Chronicles of Riddick. That puts the film on target for a modest $18.1 million opening frame.

Not even the addition of IMAX or Vin Diesel's career comeback could help muster up a stronger debut for the dormant franchise. Opening on the first weekend after a very crowded summer where audiences had their fill of action movies is also proving to have been a strategic misstep.

Early word of mouth appears to be questionable, too, with the pic's Flixster user rating down to 72 percent after having previously boasted a 98 percent anticipation score less than two days ago. As mentioned earlier, however, the overseas potential of Riddick should still be enough to send the film into successful territory. The film is reported to have cost just $35-40 million (less than half of Chronicles' production budget) before marketing expenses.

Meanwhile, Lee Daniels' The Butler and We're the Millers continue to enjoy their strong runs. Butler grabbed $2.37 million on Friday as it heads toward a projected $8.5 million frame. Millers added $2.3 million, putting it on pace for an $8 million weekend.

Friday Update #2: Sources tell BoxOffice that Riddick should earn at least $22 million during its debut frame. While that won't top the $24.3 million debut--roughly $32 million when adjusting for inflation--that Chronicles of Riddick managed in 2004, it's still a solid showing and it'll be good enough to push Lee Daniel's The Butler down to second place after a three-week run on top. Nine years makes a huge difference when it comes to the popularity of a franchise, and it's tough to expect any film to match its predecessors after such a prolonged absence.

There's little doubt that Riddick will top the $115 million global haul that Chronicles raked in. Star Vin Diesel is a marketing machine these days, and the nearly 46.6 million likes he commands on Facebook are made up of plenty of overseas fans. Look for strong numbers in key territories such as the UK, Brazil and Russia.

Friday Update #1: Universal reports that Riddick took in an estimated $900K from Thursday evening shows. The debut puts Riddick 33% ahead of the $665K that Resident Evil: Retribution made from midnight shows before opening to $21 million during the Sep. 14-16, 2012 frame.