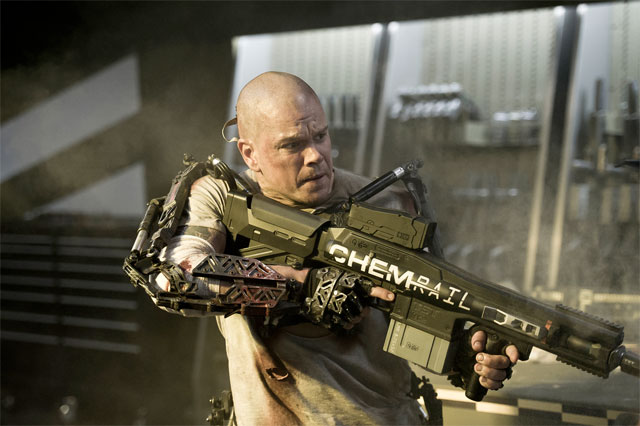 A first place opening in China propelled Elysium to reach a $127.1 million overseas cume. The sci-fi flick brought in a total of $21.2 million outside of North America over the weekend. China accounted for an $11.7 million debut over its first four days in release, meaning that Elysium's Chinese debut came in 11% ahead of the Oblivion premiere. Elyisum has grossed $212.7 million worldwide.

Monsters University is quietly adding to its $724.4 million global cume, making strides at the global box office despite being overshadowed by the blockbuster run of Despicable Me 2. The animated prequel has collected a total of $459.2 million from the overseas box office. The leading markets for Monsters University are Japan ($88.8M), the U.K. ($44.4M), Mexico ($38.2M), China ($30.4M), Argentina ($23.7M), Australia ($22.4M), and Russia ($20.9M). The last remaining territory for Monsters University is South Korea, where it will open on September 12.

The Smurfs 2 is days away from a major overseas milestone after raking in $7.3 million over the weekend to reach a $199.2 million cume. The film has grossed $267.4 million worldwide. The sequel will open in Australia and China this week.

One Direction: This is Us added another $7.6 million to its overseas total, bringing the cume to $26 million. Italy led the weekend with $2.1 million from 350 screens, beating the debuts of Michael Jackson's This is It and Justin Bieber: Never Say Never. The concert film reached a $9.1 million cume during its second weekend in the United Kingdom. One Direction: This is Us has grossed $50 million worldwide.

The Conjuring scared its way to a $124.5 million overseas total following an $8.5 million weekend from 47 markets. The Conjuring became the highest grossing horror film of all time in Mexico after reaching a $15 million cume during its third consecutive weekend atop the box office. Other top markets for the thriller include the United Kingdom ($15.7M), Russia ($10M), and Australia ($8M). The Conjuring has grossed $259 million worldwide.

We're the Millers made $9.9 million from 41 markets, reaching a $55.1 million overseas total. The comedy has grossed $171 million globally.

Planes reached a $121.2 million global cume after taking in $11.3 million from 31 overseas territories, including openings in Lebanon, Singapore, Indonesia, Argentina, Uruguay, and Paraguay. The overseas total for the animated film is $41.9 million, with $10.8 million of that figure coming from the United Kingdom. Planes will have a chance to boost its numbers next weekend with big openings in Brazil and Mexico.

The Lone Ranger is on the verge of salvaging a $250 million worldwide take in what has an amounted to a disastrous box office run. The film is buoyed by a $154.5 million overseas take that takes its current global total to $243.3 million. An October 6 opening in China could push the global cume to the $300 million range.

World War Z is winding down in its 12th weekend overseas, taking in $1 million from 865 locations across 31 markets for a $335 million overseas cue. The global total for Brad Pitt's zombie thriller is $535.9 million.

Jurassic Park 3D has been a surprise hit for Universal. The 3D re-release has grossed $69.1 million overseas, led by a fantastic $52.1 million from 20 days in China. The film's global gross is $114.5 million.

Fast 6 is in the closing moments of its theatrical run. The blockbuster action film has grossed $549.3 million overseas and $788 million worldwide.

Percy Jackson: Sea of Monsters reached a $93.2 million overseas total this weekend after bringing $6 million from 49 markets. The film relinquished the top spot in Brazil, finishing in second place and reporting a $10.1 million cume. Other top earners for the film include France ($11.5M) and Russia ($11.4M). Percy Jackson: Sea of Monsters will open in Argentina, Italy, Spain, and South Korea next weekend. The sequel has grossed $150.6M worldwide.

The Wolverine reached a $223.8 million overseas total ahead of its Japanese premiere next weekend. The superhero spin-off sequel has grossed $362.5M worldwide.

Grown Ups 2 reached an $83 million overseas cume over the weekend, taking its worldwide total to $213.6 million. The ensemble sequel surpassed the original in Russia after only ten days in release, where it is currently reporting a $7.2 million gross. Grown Ups 2 will open in France next weekend.