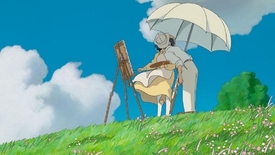 Miyazaki's The Wind Rises screened for a select North American audience this week at the Toronto International Film Festival, but the animated hit has already grossed $99.4 million in Japan. A strong $4.5 million weekend was a 33% improvement from last weekend's take, bringing the famed director's swan song days away from crossing the $100 million mark.

Man of Steel suffered a steep 55% drop in its second weekend despite being one of the weekend's most widely distributed titles across 611 screens. A $1.2 million weekend put the film in third place and gives it a $6.8 million total. The film's steep drop suggests it could hope to gross as much as $10 million from the its last major market. Star Trek Into Darkness has had a similar performance, currently sitting in eight place on the top ten chart after a $653k performance in its third frame. Star Trek Into Darkness played in a market-leading 670 screens and has grossed a total of $9 million from its Japanese run.