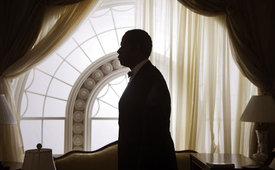 Lee Daniels' The Butler was the surprising champion at the French box office over the weekend. The indie drama walked away with a $2.6 million debut from France's highly competitive market, nearly grossing twice as much as  the opening frame of Michael Bay's Pain and Gain in a head-to-head battle. The Michael Bay dark comedy finished the weekend in second place with a $1.4 million gross.

Now You See Me reached an important benchmark by hitting the $25 million mark after seven weeks in France. The Conjuring reached the $8 million mark in its fourth frame. Red 2 nears the bottom of the table after surpassing the $5 million mark in its third frame, a long way down from its opening weekend as the top film on the market.