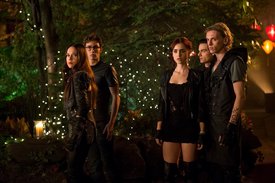 A strong $12.7 million debut for domestic period drama The Face Reader led the weekend as South Korea prepares for its Chuseok holiday on Wednesday. The Chuseok long weekend is the equivalent in box office terms to the Thanksgiving weekend in the United States.

The four Western new releases had to settle for mid-table spots ahead of the holiday weekend. Mortal Instruments fared best with a $1.3 million bow, while fare oriented to slightly younger viewers struggled. Monsters University had a fourth place debut with $1.2 million. Percy Jackson: Sea of Monsters placed in the middle of the table with a $1.1 million take. Despicable Me 2 was a surprise flop, the film finished the weekend with a $1.9 million take including previews but occupies the sixth position on the chart after failing to hit the $1 million mark over the weekend.