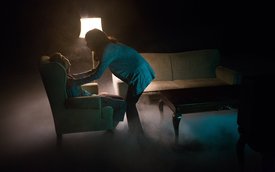 Insidious: Chapter 2 broke the box office record for an opening day gross by a horror film in the United Kingdom in its day-and-date premiere. The horror sequel went on to gross a $4.5 million total over the weekend, claiming the top spot at the box office with one of the more successful debuts for the genre in recent memory. It's a big achievement considering the horror filmed opened alongside Ron Howard's Rush and White House Down in a three-way battle for #1.

Rush settled for a $3.3 million second place finish. The sports drama played in 457 screens and averaged $7,293 per theater, only behind the $11,036 average posted by the Insidious sequel across 414 screens. White House Down placed third with a $1.8 million bow.

Last week's top film, the romantic time travel comedy About Time, dropped to fourth place with a $1.7 million hold. It was a good sophomore weekend for the film, which only fell 37% from the previous weekend. About Time has grossed a total of $6.1 million in the United Kingdom.