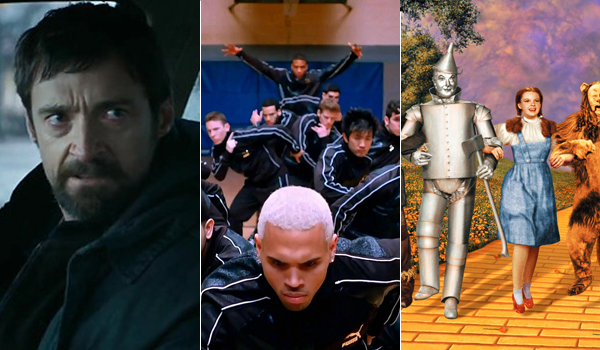 Sunday Update: Warner's Prisoners led the way this weekend with an estimated $21.43 million. The thriller starring Hugh Jackman and Jake Gyllenhaal debuted on the high end of pre-release expectations. Prisoners was helped out this weekend by the relatively empty marketplace, mostly positive critical reviews and the drawing power of Jackman and the rest of the film's cast as a whole. In comparison to some of Jackman's non-X-Men films, Prisoners debuted 22 percent below the $27.32 million start of 2011's Real Steel and 45 percent ahead of the $14.80 million start of 2006's The Prestige. Compared to previous recent high-profile Warner Bros. September releases, Prisoners opened a tad below the respective $23.81 million and $22.40 million starts of 2010's The Town and 2011's Contagion.

Prisoners grossed $7.0 million on Friday, was up a healthy 29 percent on Saturday to take in $9.02 million and is estimated to decline 40 percent on Sunday to gross $5.41 million. That gives the film an estimated opening weekend to Friday ratio of 3.06 to 1, which is an early promising sign for the film. On Friday, Prisoners received a B+ rating on CinemaScore, but Warner Bros. notes that the rating improved to an A- among moviegoers on Saturday. The audience breakdown for Prisoners skewed slightly towards female moviegoers (52 percent) and heavily towards moviegoers over the age of 25 (72 percent). Prisoners will have a good chance of holding up well going forward, though doing so isn't a lock at this point either given the significant upcoming competition the film will face for adult audiences throughout the rest of September and October.

Insidious Chapter 2 fell one spot to land in second with an estimated $14.5 million. FilmDistrict's successful low-budget horror sequel was down a sharp 64 percent from last weekend, but the decline was quite understandable given the film's status as a high-profile horror sequel and the additional early front-loading the film experienced last weekend from opening on Friday the 13th. In comparison, 2010's Paranormal Activity 2 fell 59 percent in its second weekend to take in $16.51 million, though it should be noted that Paranormal Activity 2 received an added boost that weekend from the Halloween holiday. Insidious Chapter 2 has grossed $60.86 million in ten days. That places the film 7 percent behind the $65.67 million ten-day start of Paranormal Activity 2, though Insidious Chapter 2 is highly likely to close that percentage gap going forward thanks in part to opening well before Halloween and the limited amount of horror options this fall.

Relativity's The Family was also down one place to finish in third this weekend with an estimated $7.0 million. After a respectable start last week, the Luc Besson directed film starring Robert De Niro and Michelle Pfeiffer experienced an underwhelming 50 percent decline in its second weekend. So-so word of mouth and competition from Prisoners for adult moviegoers appear to have taken a toll on The Family this weekend. The ten-day start for The Family stands at $25.64 million, placing it 10 percent behind the $28.53 million ten-day start of 2008's Righteous Kill and 46.5 percent ahead of the $17.50 million ten-day take of 2011's Killer Elite. The Family will likely continue to fall off quickly going forward given the previously mentioned upcoming competition for adult moviegoers.

After falling off a bit last weekend, Lionsgate's Instructions Not Included rebounded nicely this weekend with an estimated $5.7 million fourth place performance. The low-budget Eugenio Derbez comedy vehicle was up 17 percent over last weekend, which was especially impressive given that the film only expanded into an additional 45 locations this weekend. The surprise hit from Pantelion Films has grossed $34.26 million in 24 days and after this weekend's hold is likely to remain a factor at the box office for quite some time.

Sony's Battle of the Year was off to a rough start this weekend with an estimated fifth place take of $5.0 million. The modestly budgeted 3D dance film from Screen Gems featuring Josh Holloway and Chris Brown opened below its already modest expectations and performed poorly for a dance film in general. Battle of the Year did receive a very solid A- rating on CinemaScore and generated a strong estimated opening weekend to Friday ratio of 3.51 to 1 (after opening with $1.43 million on Friday), but positive word of mouth is unlikely to be much of a factor going forward given the small size of the film's opening weekend performance. The audience breakdown for Battle of the Year skewed towards female moviegoers (60 percent) and moviegoers 21 and over (55 percent).

Sony continues to have a tough go of it as of late, as Battle of the Year joins the growing list of recent domestic under-performers for the studio which has also included The Mortal Instruments, The Smurfs 2, White House Down and After Earth. However, things should turn around for Sony in a big way next weekend with the release of the highly anticipated Cloudy with a Chance of Meatballs 2.

On the platform front, Fox Searchlight's Enough Said was off to a healthy start this weekend with an estimated $240,000 from just four locations in New York and Los Angeles. That gave Enough Said a strong per-location average of $60,000. Since its opening on Wednesday, the critically acclaimed romantic comedy starring Julia Louis-Dreyfus and the late James Gandolfini has grossed $293,734 through its first five days.

Universal's Rush was off to a promising platform start of its own with an estimated $200,000 from five locations in New York and Los Angeles. With that said, it was a bit underwhelming that the film's per-location average of $40,000 came in significantly below the per-location average of Enough Said (though that may be more a reflection of the strength of Enough Said this weekend). Rush (which was directed by Ron Howard and stars Chris Hemsworth and Daniel Brühl) will hope to be aided by its strong critical reviews when it expands into wide release next weekend.

Saturday Morning: Warner Bros. reports that Prisoners grabbed an estimated $7.01 million in its Friday debut, putting the drama on track for a $20.5 million opening weekend. The ensemble flick led by Hugh Jackman and Jake Gyllenhaal marks the first offering for adult audiences in over a month--since Lee Daniels' The Butler began its very successful run.

Strong critical reviews (currently at 79 percent on Rotten Tomatoes) have helped propel Prisoners to its healthy opening. Although the film has been somewhat divisive among early crowds, its Flixster score still sits at a strong 88 percent after one day. The picture earned an overall "B+" CinemaScore with 64 percent of those polled giving it an "A-" and 36 percent giving it a "B+"--a relatively good grade for what appears to be a polarizing film.

Prisoners is successfully capitalizing on the star power of Hugh Jackman in addition to its recognizable ensemble cast. Jackman is fresh off the success of last year's Les Miserables and this past summer's The Wolverine. Some awards buzz has surrounded Prisoners, although it remains to be seen how much longevity the film will find at the box office--due in large part to the number of adult-oriented films (which are also receiving strong early buzz) set for release throughout October.

Sony's Battle of the Year is failing to catch fire. The dance flick starring Chris Brown and Lost's Josh Holloway was targeting teenagers in a bit of counter-programming this weekend, but most of them are rejecting the flick judging by the film's $1.5 million first day take. Not surprisingly, critics have lambasted the film with a 6 percent Rotten Tomatoes score while early audience word of mouth has driven Battle's Flixster user score down to a more reasonable, though still disappointing, 65 percent. Last year's Step Up Revolution wound up as the lowest grosser of that franchise, and with Battle's performance it's evident that fans of the genre clearly aren't itching for just another generic dance movie. Look for Battle of the Year to pull around $4.3 million this weekend.

WB's Wizard of Oz re-release fared well in IMAX and 3D to start the weekend. The family classic brought in an estimated $751,000 yesterday. Expected to perform even stronger throughout the weekend as parents and kids make their way to theaters, the film should pull in around $3 million this weekend. Wizard of Oz continues to prove its enduring appeal even after 74 years.

Lastly, Universal estimates a strong $66,000 opening day for Ron Howard's Rush, which opted for a platform release in 5 theaters this weekend ahead of its wide release on September 27. Strong buzz for the film is helping in addition to Howard's credentials as well as star Chris Hemsworth. Rush is aiming to earn around $220,000 this weekend for a strong per-theater-average of $44,000.

Tags: Prisoners, Battle of the Year, Wizard of Oz, Rush