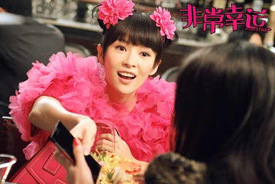 U.S. director Dennie Gordon has a large number of television credits and three feature films on her resume: the David Spade vehicle Joe Dirt (2001), the Amanda Bynes vehicle What a Girl Wants (2003), and the Olsen twins vehicle New York Minute (2004). Nearly ten years later, she might have the biggest success of her career after directing her first film in China. The Chinese film My Lucky Star is the top grossing film in China this week, no small feat for Dennie Gordon's first try at connecting with Chinese audiences. Gordon has succeeded in making a top-grossing Chinese film as a U.S. director, a feat that Keanu Reeves was unable to accomplish earlier this year with the flop 47 Ronin.

Chinese star Zhang Ziyi reprises her role from the 2009 hit Sophie's Revenge in this light-hearted spy flick prequel, a tone that Gordon is familiar with in her U.S. work. My Lucky Star has earned a successful $13.54 million in its first weekend in China and has the potential of becoming the highest-grossing film in Gordon's career.

Legal drama Silent Witness posted a resilient hold in its second week, adding an impressive $12.48 million to take its domestic total to $19.36 million. The hold was strong enough to overshadow the debut of Turbo, which came below Fox's Sunday estimates of $9.9 million with EntGroup reporting an opening take of $8.48 million.

The Smurfs 2 and Elysium continued their positive runs in China. The animated sequel added $8.15 million in its first full week of release, reaching an $18.22 million total. Sony's sci-fi flick grossed $3.98 million to take its 18-day total to a healthy $24.45 million. The Great Gatsby has had a consistent run, even without posting blockbuster numbers in China. The literary adaptation has grossed a total of $13.34 million from the market.