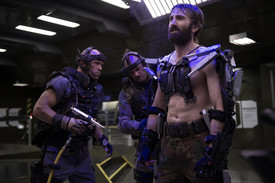 A $2.4 million for Elysium launched the film to the top of the Brazilian box office over the weekend. Neill Blomkamp's latest sci-fi spectacle features two top Brazilian actors, with Alice Braga and Wagner Moura joining a cast that includes Hollywood A-Listers Matt Damon and Jodie Foster. The film also fared well the per-screen average column with a $6,325 tally.

Planes put in a great hold in its second weekend, dropping 16% for a $1.3 million take. The animated Disney film played in a market-leading 594 screens and posted a $2,250 per-screen average. Planes has grossed a total of $3.8 million in its Brazilian run. The Conjuring also came out of its second weekend with a strong hold, dropping 26% for a $1.2 million take. The Conjuring has a Brazilian cume of $3.8 million.

The Heat had to settle for a fourth place premiere, drawing $992k from 300 screens. The film's per-screen average is a successful $3,307. The best average on the market, however, went to domestic release O Tempo E O Vento, which earned an average of $7,701 from only 48 screens.

Rush fizzled out in its second weekend in Brazil. Ron Howard's F1 drama has disappointed in a market where the sport has loyal followers, closing its second frame on the bottom of the top ten list. Rush has grossed a total of $839k in limited release in Brazil.