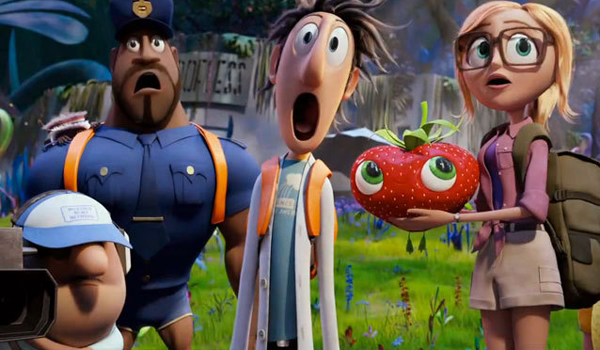 Cloudy with a Chance of Meatballs 2 opened with $9.3 million on Friday, increased 63 percent to take in $15.15 million on Saturday and is estimated to decline 30 percent on Sunday to gross $10.55 million. That gave Cloudy 2 an estimated opening weekend to Friday ratio of 3.76 to 1. The film received an encouraging A- rating on CinemaScore. Family audiences made up 80 percent of the film's overall audience this weekend. Cloudy 2 is likely to hold up quite well going forward, thanks in part to there being no new options for family audiences until Relativity unleashes Free Birds on November 1 (a factor which may have deflated this weekend's performance a bit).

It was a close race for second place this weekend, with Warner's Prisoners edging out Universal's Rush. The thriller starring Hugh Jackman and Jake Gyllenhaal fell a so-so 46 percent from last weekend's first place debut to gross an estimated $11.27 million. Despite good word of mouth, new competition from four new wide releases clearly took a toll on Prisoners this weekend, especially since the overall marketplace tends to expand less in September than it does at most other times of the year. The marketplace for adult moviegoers will become even more crowded next weekend with the release of fellow Warner Bros. film Gravity and Fox's Runner Runner. Prisoners has grossed a solid $38.95 million in ten days, placing it 12 percent behind the $44.26 million ten-day take of 2011's Contagion (which fell 35 percent in its second weekend to gross $14.55 million).

In its first weekend of wide release, Rush placed in third with $10.31 million. The Ron Howard directed racing film starring Chris Hemsworth and Daniel Brühl debuted towards the lower end of its modest expectations, which were held in check in part by the lack of popularity of Formula 1 racing in the United States. This weekend's performance for Rush was 15 percent below the $12.16 million start of last September's Trouble with the Curve. Including last week's platform launch, Rush has grossed $10.57 million through ten days.

Rush grossed $3.7 million on Friday, was up 8 percent on Saturday to take in $4.0 million and is estimated to fall 35 percent on Sunday to gross $2.61 million. That placed the film's opening weekend to Friday ratio at 2.79 to 1. Strong critical reviews and an A- CinemaScore are positive early signs for Rush going forward. However, with the marketplace for adult moviegoers to be especially crowded throughout October, strong holding power is by no means a lock for the film at this point (as already witnessed by Prisoners this weekend). Rush is expected to perform stronger overseas than domestically.

Baggage Claim, starring Paula Patton, opened with $3.28 million on Friday, increased 17.5 percent to gross $3.85 million on Saturday and is estimated to fall 43.5 percent on Sunday to gross $2.18 million. The film generated an estimated opening weekend to Friday ratio of 2.84 to 1. With an A- rating on CinemaScore, Baggage Claim could hold up better than Don Jon going forward (which received a lackluster C+ rating).

Don Jon, starring Joseph Gordon-Levitt and Scarlett Johansson, grossed $3.29 million on Friday, increased 5.5 percent to take in $3.47 million on Saturday and is estimated to decline 35 percent on Sunday to gross $2.24 million. The film registered an estimated opening weekend to Friday ratio of 2.74 to 1. Don Jon slightly outpaced the $8.64 million start of 2011's 50/50, but is unlikely to hold up as well as 50/50 did, especially given its rating on CinemaScore.

On the limited front, Fox Searchlight's Enough Said grossed $2.12 million from just 227 locations. The romantic comedy starring Julia Louis-Dreyfus and the late James Gandolfini earned a per-location average of $9,317 for the weekend. The ten-day total for Enough Said stands at $2.48 million.

In other box office news, Lionsgate's Instructions Not Included is now the highest grossing Spanish Language film of all-time at the domestic box office. After taking in an estimated $3.38 million this weekend, the Eugenio Derbez comedy vehicle from Pantelion Films has grossed $38.57 million to date. The previous record holder was Pan's Labyrinth with a total gross of $37.63 million.

Saturday Update: Sony reports that Cloudy with a Chance of Meatballs 2 ate up $9.3 million on Friday, putting it on pace for a $35.5 million debut weekend. That will be a higher debut than its predecessor's $30.3 million back in September 2009, however, the sequel looks to fall short of Sony's Hotel Transylvania which opened to a September record $42.5 million last year. With an "A-" CinemaScore and current 81 percent Flixster user rating, word of mouth from families appears healthy and should continue driving the film throughout October as the only animated release before November 1's Free Birds.

Ron Howard's Rush grabbed $3.7 million with its expansion into wide release yesterday. After a successful platform launch in five theaters last weekend, the well-reviewed Formula 1 racing pic is headed for an $11 million frame. In addition to strong critical response, the film's 94 percent Flixster score and "A-" CinemaScore are very encouraging for long-term prospects.

Relativity Media estimates a $3.29 million opening day for writer/director/star Joseph Gordon-Levitt's Don Jon. That bests the $2.89 million first day tally of the Gordon-Levitt starrer 50/50 on the same weekend in 2011. Don Jon's subject matter appears to be dividing audiences with a "C-" CinemaScore, although, its Flixster rating is a decent 75 percent so far. The R-rated comedy is on pace for a $9.5 million debut weekend.

Meanwhile, Baggage Claim checked in with $3.28 million on Friday and is heading toward a $9.4 million weekend. Lacking much star power and facing a relatively crowded market of new releases put this one on the back-burner for moviegoers. The film's target audience responded with an "A-" CinemaScore, however, Flixster users are less enthusiastic with its 67 percent score.

Friday: Sources tell BoxOffice that Cloudy with a Chance of Meatballs 2 is headed for $11 million on Friday, which means that the animated flick could hit $39 million during its debut frame. That's enough to easily top the $30.3 million debut of 2009's Cloudy with a Chance of Meatballs, but it won't best Hotel Transylvania's $42.5 million debut in September 2012. The healthy debut ends the animation losing streak that began with Turbo in July. Cloudy 2 represents a breath of fresh air for Sony. The distributor has been struggling most of the year with duds such as After Earth and White House Down, and a #1 opening was desperately needed.

Rush and Don Jon are in the same ballpark. Both adult-skewing flicks look to be on pace for anywhere between $10 million-$13 million this weekend. Rush has a slight advantage in that it's been building buzz since its platform release last weekend.

Baggage Claim will have to settle for a lackluster debut of around $7.5 million. The romantic comedy failed to build buzz on Facebook and Twitter in the weeks leading up to its release. It's clear that the Fox Searchlight release is the victim of a crowded marketplace.