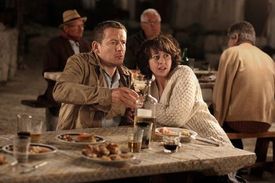 The top film in the French box office this weekend reads like a typo for those unfamiliar with Icelandic volcanos. In 2010, the volcano Eyjafjallajokull erupted in Iceland, causing major havoc in the airline industry after volcanic ash prompted flight delays around the world. Alexandre Coffre's new film takes advantage of the real-life scenario to create a road trip comedy starring Valerie Bonneton and Dany Boon, The film, titled after the volcano itself, grossed $4.1 million in its opening weekend and led the per-screen average category with a $6,398 take from 645 screens.

Lee Daniels' The Butler continues its surprisingly successful run in France, crossing the $10 million mark in its fourth weekend. The Butler grossed $1.5 million over the weekend, a mere 24% drop from the previous weekend.

Insidious: Chapter 2 posted a $1.28 million bow from 240 screens, registering a strong $5,346 per-screen average in its opening weekend. The horror film outperformed the premiere of Diana; the Lady Di biopic struggled out of the gate with a $1 million debut from 406 screens. Machete Kills rounds out the top ten with a $617k debut from 207 screens. Robert Rodriguez's grindhouse-inspired sequel opened in the same range as the original's $661k debut in 2010. Machete went on to gross $1.4 million from the French box office.