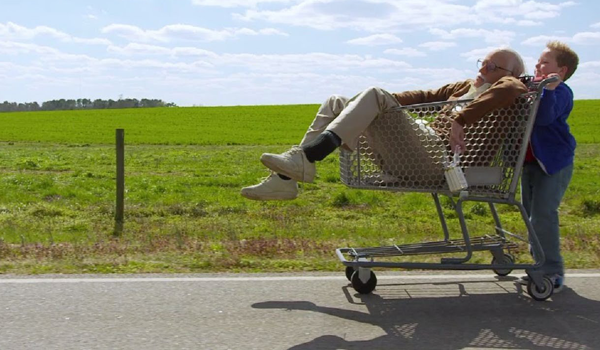 Paramount is gearing up to release Johnny Knoxville's Jackass Presents: Bad Grandpa on October 25, and the question remains: will fans show up without the promise of the entire Jackass gang?

A spin-off starring the face of the franchise makes some sense, but the plot-driven prank movie deviates from the straightforward story-less antics the Jackass crew became famous for since their show's 2000 debut. Bad Grandpa will be a test of the brand's overall strength as Knoxville targets Sacha Baron Cohen's wheelhouse. The biggest advantage in its favor right now is being the first comedy aimed toward young adults since August's We're the Millers. Will that be enough?

Online buzz--something this film should be generating a fair amount of--is severely lacking right now. Twitter activity is 7 percent behind that of Movie 43 (one of 2013's first box office flops) at the same point in the release cycle, 8 percent behind The Dictator, and 58 percent behind This Is the End. That's concerning given the established fan base of the Jackass franchise. Bad Grandpa is notably pacing 60 percent ahead of Jackass 3-D's tweet count, however, we'd like to see a more distinct increase in chatter given the three-year gap. Twitter's user base has grown 50 percent since October 2010.*

Flixster doesn't offer anymore encouragement. Grandpa carries a respectable 96 percent "want to see" score, but that's overshadowed by the mere 8,475 voters it's been able to corner. A last minute surge in demand over the next two weeks could help, but it won't come anywhere close to the 23,007 anticipating voters of We're the Millers or 34,541 drawn by This Is the End before their respective release dates. For reference, Movie 43 closed with 9,292 *total* voters (who gave it a 94 percent score)--a figure which Bad Grandpa will end up much closer to as it's adding less than 200 per day right now.

Facebook is a flickering bright spot for the comedy. It boasts an incredible 28.59 million fans, ranking second only to Fast & Furious as the most "liked" franchise on a single Facebook page among films being tracked by BoxOffice. The caveat: most of those fans are carried over from Jackass 3-D's success. Prior to its release three years ago, the Jackass Facebook page owned 2.2 million fans. The reality is recent Facebook activity, while healthy, isn't as strong as the deceiving numbers make it out to be.

BoxOffice is currently forecasting a $27 million opening weekend and $62 million domestic haul for Jackass Presents: Bad Grandpa--figures which would mark significant drop-offs from Jackass 3-D's $50.4 million debut (an October record at the time) and $117.2 million total. The sharp decline is reasonable given the lack of online enthusiasm for the spin-off, and would likely still put the film in very profitable territory. We'll continue to analyze the comedy's buzz over the next two weeks before our final forecast is published. Perhaps those 17 million trailer views can end up counting for something.

*Data sourced from BusinessInsider and TechCrunch