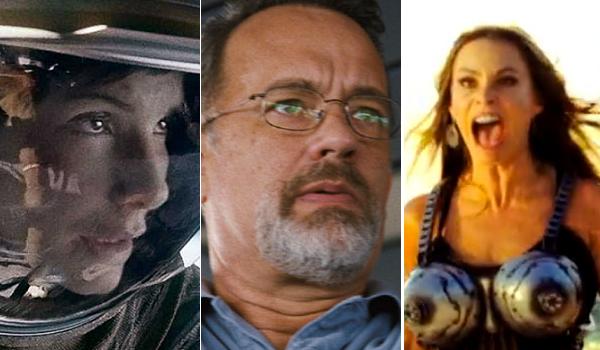 Sunday Update: Warner's Gravity had an exceptional second weekend hold to remain in first place this weekend with an estimated $44.27 million. The Alfonso Cuarón directed sci-fi drama starring Sandra Bullock and George Clooney was down just 21 percent from its opening weekend performance, as the film had the type of second weekend hold that is rarely seen by blockbuster fare. Strong word of mouth and critical reviews, continued higher priced 3D and IMAX admissions and the film skewing heavily towards older moviegoers are all factors helping out the holding power of Gravity. Gravity zoomed past the $100 million mark on Saturday (its ninth day of release) and has now grossed $123.399 million in ten days. That places the film a very impressive 43 percent ahead of the $86.26 million ten-day start of The Heat earlier this year (which fell 37 percent in its second weekend to gross $24.76 million). Gravity has clearly become an event film and doesn't look to be slowing down anytime soon.

Sony's Captain Phillips debuted in second place with an estimated $26.0 million. The Paul Greengrass directed film starring Tom Hanks exceeded pre-release expectations, which is obviously especially impressive in this case given the continued strength of Gravity this weekend. Like Gravity, Captain Phillips is being helped out by very strong reviews and early word of mouth (the film received an A rating on CinemaScore). Captain Phillips represents a nice bounce back for Hanks, who had seen his drawing power fade in the last few years with the performances of Larry Crowne, Extremely Loud & Incredibly Close and Cloud Atlas. The opening weekend performance of Captain Phillips was 6 percent stronger than the $24.44 million Sony's Zero Dark Thirty earned in its first weekend of wide release back in January.

Captain Phillips opened with $8.5 million on Friday (which included an estimated $0.60 million from late night shows on Thursday night), increased 23 percent on Saturday to take in $10.45 million and is estimated to decline 32.5 percent on Sunday to gross $7.05 million. In general, daily holds are expected to be strong on Sunday with the aid of the Columbus Day holiday on Monday. The estimated opening weekend to Friday ratio for Captain Phillips was 3.06 to 1, which is a promising early sign going forward.  The audience breakdown for Captain Phillips skewed significantly towards moviegoers over 35 (62 percent) and slightly towards male moviegoers (52 percent).

Machete Kills proved to be a disappointment this weekend with a fourth place estimated debut of just $3.797 million. The Robert Rodriguez directed sequel released by Open Road opened below its already low expectations and a very lackluster 67 percent below the $11.42 million debut of Machete back in 2010. Clearly, opening in such a crowded marketplace for adult moviegoers proved to be an unwise decision and given the grosses of the first film, there wasn't much potential for a Machete sequel to begin with. With an estimated opening weekend to Friday ratio of 2.71 to 1 (the film opened with $1.40 million on Friday), a lackluster B- CinemaScore rating and the film's fanbase driven nature, Machete Kills won't be in theatres for long.

Fox's Runner Runner and Warner's Prisoners both finished just behind Machete Kills with respective fifth place and sixth place estimated takes of $3.725 million and $3.665 million. The three films are close enough to one another that the order of the three could still change when actuals are released on Monday. Runner Runner was down 52 percent from last weekend's already poor start, while Prisoners stabilized this weekend to decline a solid 36 percent. To date, Runner Runner has managed just $14.11 million in ten days and Prisoners has grossed a respectable $53.62 million in 24 days.

On the limited front, Relativity's Romeo and Juliet made very little impact this weekend. The Shakespeare adaptation, starring Hailee Steinfeld and Douglas Booth, grossed an estimated $509,000 from 461 locations. That gave Romeo and Juliet a per-location average of just $1,104 for the frame.

Saturday Update: Warner Bros. reports that Gravity added $12.715 million to its haul on Friday, cementing its hold on the top spot in its sophomore weekend. Yesterday's gross represents a stellar 27.3 percent drop from the film's opening day and pushes the domestic cume up to $91.85 million in its first eight days. BoxOffice projects Gravity will accumulate $45 million this weekend, cracking the $100 million domestic threshold on Saturday.

Sony's Captain Phillips is off to a great start all its own: the true story thriller bowed to $8.5 million on Friday and is on course for a strong $26.5 million debut weekend. That marks Tom Hanks' best opening weekend since 2009's Angels & Demons bagged $46.2 million. Strong critical reception (currently 95 percent on Rotten Tomatoes) and the promise of seeing Hanks in his first widely acclaimed role in years proved to intrigue general audiences, which is especially noteworthy given how much market demand is already being eaten up by Gravity. Early word of mouth is strong, too, with Flixster voters holding the pic at a 92 percent approval rating thus far--only a few points below its final anticipation rating before release.

Machete Kills didn't fare so well in its opening. Pulling a disappointing $1.4 million yesterday, 63.8 percent lower than the first movie's $3.87 million first day, the campy sequel is targeting a $4 million opening frame. This marks a significant drop-off from the original's $11.4 million first weekend back in 2011, once again signaling that "sequels for the sake of sequels" just aren't what audiences are looking for right now. Machete Kills had been trailing Kick-Ass 2 in online buzz activity leading up to release, making this tepid opening a bit less surprising. Critical reception is significantly poorer than the first film, while audience word of mouth seems to be falling in line: its Flixster score is currently at 61 percent, already 2 percent below that of its predecessor, and dropping.

Meanwhile, opening in limited release this weekend was the modern retelling of Romeo & Juliet. That pic earned $192,000 from 461 theaters on Friday. BoxOffice projects a $550,000 weekend.

Friday Update #2: Sources tell BoxOffice that Gravity will easily stay #1 this weekend with a sophomore haul that could hit $40 million.

Captain Phillips is off to a great start even though it won't finish first. Sony's drama could end up with an impressive $25 million this weekend.

Machete Kills is a victim of a crowded market, and it looks like it may hit $7 million-$7.5 million this weekend.

Friday Update #1: Sony reports that Captain Phillips took in $600K from Thursday evening shows. That's enough to top the $450K Thursday debut of Lee Daniels' The Butler, an adult-skewing flick that has earned more than $112 million in North America. Sony still expects Captain Phillips to rake in around $19 million during its debut frame. The wild card this weekend will be Gravity. If the space flick posts a solid sophomore frame--and strong weekday grosses indicate that it could do just that--then it could hinder Captain Phillips a bit.

It's clear that critics are helping the cause: Captain Phillips currently boasts a healthy 94% approval rating on Flixster. It also doesn't hurt that the film and star Tom Hanks are very much a part of the Oscar conversation. As for general audiences, early word of mouth looks to be favorable thanks to a solid 89% approval rating on Flixster from nearly 25,000 users.