ITALY: The Minions Take Over Italy with $6.9M Debut 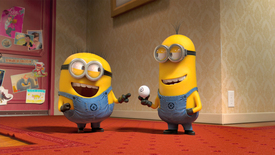 Despicable Me 2 broke through the Italian box office with a $6.9 million opening weekend. It’s a fantastic result for the animated sequel, already reaching more than half of the lifetime total of Monsters University in Italy. Monsters University opened to $4.4 million in late August and is the second-highest grossing animated film of 2013 in the overseas box office. The Minions packed a market-leading 863 screens with an $8,105 average –more than any other film in the market.

Domestic comedy Aspirante Vedovo had a successful second place debut with a $2.2 million bow. The Italian comedy averaged $4,938 from 463 screens and bumped Gravity’s second weekend down to third place. Gravity was overshadowed by the two new releases despite posting a $1.9 million hold, only 31% down from the previous frame. Gravity has grossed a total of $5.5 million in Italy since its October 10 debut.