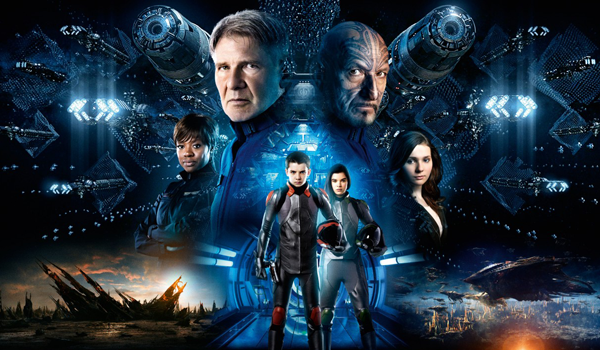 The holiday box office season is upon us, and with it comes yet another science fiction flick: Ender's Game. The genre has walked a somewhat rocky road this year with Oblivion, Star Trek Into Darkness, Pacific Rim, and Elysium all performing under expectations and/or just well enough to be considered modest successes. Gravity is bucking that trend as we speak, but as many will be quick to point out, it's hardly comparable to those other films.

Aside from being the next in line of a glut of sci-fi pics, and having the unfortunate fate of being the first to open just weeks after Gravity, Ender's Game will also have to contend with Marvel's Thor: The Dark World in its second weekend (followed by Catching Fire in its fourth). Translation: genre fans may end up turning Ender into a one-weekend movie unless word of mouth miraculously trumps that of its competition. The holiday season could pad any potentially short legs, but Lionsgate/Summit isn't in an enviable position with the flick.

Online, the film's early indicators are a mixed bag. Twitter activity is 51 percent behind that of Pacific Rim at the same point before release, but 45 percent ahead of John Carter. Ender's chatter also trails Tron: Legacy and The Last Airbender by significant amounts.

Flixster is a major bright spot for Ender's Game where it boasts a strong 98 percent anticipation score from over 38,000 voters. That tops the same-point counts of Pacific Rim and Oblivion by 19 percent and 151 percent, respectively, while also blowing away the mere 13,022 voters John Carter mustered by its release date.

Some early setbacks have taken a small toll on Ender's Game's promotional cycle--namely, from sites like "Skip Enders Game"--a petition asking audiences to boycott the film in response to Orson Scott Card's controversial views on homosexuality. (Card is the author of the book series, originally published in 1985, and a producer on the film.)

The situation is somewhat reminiscent of the negative buzz 2007's The Golden Compass had to face. As awareness for that adaptation grew before its release, so did the fact that its themes were derivative of the author's (Phillip Pullman) atheistic views. Whether or not that was the primary cause for Compass's domestic failure at the box office is debatable, but source material that potentially alienated 80 percent of North America and one-third of the global community wasn't good for business.

The plot of Ender's Game is less rooted in controversial themes, and the aforementioned petition boasts fewer than 11,000 signatures at the time of this story's writing. Still, marriage equality is a hot button issue in our culture right now, so any possible connection to it is a factor worth considering--especially if the media decides to run with it over the next few weeks. Then again, from the studio's point of view, any press may be good press, and a crowd-pleasing film can overcome negative buzz.

Based on current trends, Ender's Game is eyeing an opening weekend in the $25-30 million range, although, the divide between online metrics is indicative of that range fluctuating over the next two weeks. That kind of opening weekend would make $100 million domestically very challenging. Lionsgate/Summit is mounting a respectable marketing campaign thus far (despite a lack of Ender himself), but at a reported cost of $100+ million before marketing, this looks like yet another sci-fi pic that will need a strong overseas performance to support what is shaping up to be a modest domestic run.