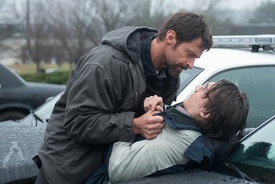 Julian Assange has been repeatedly attacking The Fifth Estate from his asylum at the Ecuatorian embassy in London, predicting that the film based on true events would bomb at the box office. Assange was on the mark in the United Kingdom, as The Fifth Estate opened in the bottom half of the box office table. The film was unable to break the $2,000 mark in per-screen average, an especially poor result considering The Fifth Estate was only one of four films to play in over 400 screens last weekend. The Fifth Estate’s $801K bow is a disappointment for the film starring Benedict Cumberbatch and a bad omen a week ahead of its release in North America.

Prisoners is enjoying its time on the right end of the box office table. There’s no stopping Prisoners in the U.K.; the Hugh Jackman/Jake Gyllenhall vehicle led the box office for the third consecutive weekend, adding $1.5 million to its tally and reaching an $8 million cume. Sunshine on Leith posted a $1.1 million hold in its second frame, a 5% drop from its opening weekend after expanding to 7% more screens. The film reached a $3.4 million total in the United Kingdom.

Blue Jasmine earned another $1 million in its third weekend. Woody Allen’s latest is the only film in the top five to be playing in less than 300 screens in the U.K. despite a 41% expansion compared to last weekend. Blue Jasmine has grossed a $5.3 million cume in the U.K. Filth finished the weekend in fourth place with a $1 million take that brings its total to $4 million. Ron Howard’s Rush looks to be slowing down after five weeks in release. Rush reached a $14.2 million cume after an $848K mid-table performance over the weekend.