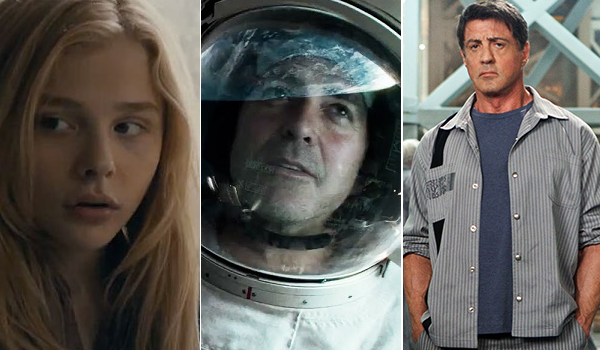 Sunday Update: Warner's Gravity took in an estimated $31.03 million to lead the box office with relative ease for a third consecutive weekend. The Alfonso Cuarón directed sci-fi drama starring Sandra Bullock and George Clooney continued to hold up nicely, as it was down a slim 28 percent from last weekend. Gravity has grossed a massive $170.57 million through 17 days of release, placing it just 12 percent behind the $193.31 million 17-day take of 2010's Inception (which fell 36 percent in its third weekend to gross $27.49 million). With the continued aid of strong word of mouth, awards season buzz and higher priced 3D and IMAX admissions, Gravity should continue to hold up very well going forward.

Sony's Captain Phillips held steady in second place with an estimated $17.3 million. Like Gravity, the Paul Greengrass directed film starring Tom Hanks also displayed strong holding power this weekend, as it fell 33 percent from last weekend's stronger than expected debut. Captain Phillips surpassed the $50 million mark this weekend and has grossed $53.33 million through ten days. That places the film 6 percent behind the $56.99 million ten-day take of 2006's The Departed (which fell 29 percent in its second weekend to gross $19.03 million).

Fellow Sony release Carrie followed closely behind in third with an estimated $17.0 million. The R-rated horror remake from Screen Gems starring Chloë Grace Moretz and Julianne Moore debuted below expectations, which had tended to fall in the range of $20 million to $25 million. Carrie had the advantage of opening in an October marketplace with limited horror options, but apparently many horror fans have already had their fill this fall with September's Insidious Chapter 2. Carrie opened 34 percent below the $25.78 million start of this year's Evil Dead and instead opened more along the lines of the $18.01 million debut of Sinister last October. With Halloween weekend still ahead of it and a smaller initial rush-out, Carrie will hope to display stronger than usual holding power for a horror film.

Carrie opened with $6.55 million on Friday, fell 4 percent on Saturday to gross $6.3 million and is estimated to fall 34 percent on Sunday to take in $4.15 million. Carrie registered an estimated opening weekend to Friday ratio of 2.60 to 1, which is respectable for a horror film. The film's B- rating on CinemaScore was also respectable for its genre. The audience breakdown for Carrie skewed towards female moviegoers (54 percent) and moviegoers under the age of 25 (56 percent).

Sony also claimed fourth place this weekend, as Cloudy with a Chance of Meatballs 2 took in an estimated $10.1 million for the frame. The 3D computer animated sequel was down a healthy 27 percent from last weekend. Cloudy 2 has grossed $93.14 million in 24 days, leaving it just $6.86 million away from the $100 million domestic milestone. Cloudy 2 is currently running 3 percent behind the $95.78 million 24-day take of 2009's Cloudy with a Chance of Meatballs.

Lionsgate's Escape Plan rounded out the weekend's top five with an estimated $9.8 million. That represented a disappointing (but largely expected) start for the action thriller starring Sylvester Stallone and Arnold Schwarzenegger. Escape Plan did open 56 percent ahead of the $6.28 million start of Schwarzenegger's The Last Stand earlier this year, though it should also be noted that Escape Plan carried a larger production budget. After two Expendables films, there was simply relatively little interest in a film teaming together Stallone and Schwarzenegger.

Escape Plan opened with $3.36 million on Friday, increased 16 percent on Saturday to take in $3.90 million and is estimated to fall 35 percent on Sunday to take in $2.54 million. That places the film's estimated opening weekend to Friday ratio at 2.92 to 1. Escape Plan received a solid B+ rating on CinemaScore, while the audience breakdown for the film skewed towards male moviegoers (55 percent) and moviegoers over the age of 30 (61 percent).

Further down on this weekend's chart, The Fifth Estate was dead on arrival with an eighth place estimated start of $1.71 million. The WikiLeaks thriller from Disney and DreamWorks opened below its already low expectations and delivered a per-location average of just $969 from 1,769 locations. Moviegoers simply weren't interested in a film about WikiLeaks, while largely negative reviews and the currently crowded marketplace for adult moviegoers certainly didn't help matters for The Fifth Estate either.

On the platform front, Fox Searchlight's 12 Years a Slave launched with an estimated $960,000 from 19 locations (in New York, Los Angeles, Atlanta, Chicago, Toronto and Washington D.C.). That gave the Steve McQueen directed awards season hopeful a strong (but non-break out) per-location average of $50,526 for the frame. The platform launch of 12 Years a Slave was fairly similar to the 2007 platform launch of No Country For Old Men, which debuted with $1.23 million from 28 locations (for a per-location average of $43,797). 12 Years a Slave will expand into additional markets on Friday and is scheduled to expand into nationwide release on November 1st.

Saturday Update: As expected, Warner Bros.' Gravity will maintain its hold on first place for a third consecutive weekend--the first* film to pull such a feat in 2013, and the first since WB's own The Hobbit: An Unexpected Journey won the final three weekends of 2012. The space drama added $9.07 million to its haul on Friday, off just 28 percent week-to-week and giving it a 15-day domestic haul of $148.61 million. The flick is now running 28.6 percent ahead of The Blind Side's pace, and 14.6 percent behind Inception. Look for Gravity to net around $31 million this weekend.

Sony reports an estimated $6.6 million opening day for their Carrie remake, a respectable figure but far short of a breakout. By comparison, the studio's Evil Dead remake bowed to an $11.9 million first day earlier this year. The built-in appeal of Carrie as well as rising star Chloë Grace Moretz and veteran actress Julianne Moore helped bring out horror fans. Word of mouth appears underwhelming with a Flixster score of 67 percent (so far), although its "B-" CinemaScore ("B+" for audiences over the age of 25, as Sony notes) isn't too bad for the horror genre. Carrie was hoping to take advantage of being the lone new horror release this October as this year marks the first since 2003 that a Saw or Paranormal Activity film won't be around to dominate Halloween/horror fans. Nevertheless, market competition proved to be too much. Look for Carrie to grab $17 million this weekend.

Despite their success in the The Expendables films, Arnold Schwarzenegger and Sylvester Stallone weren't able to turn Escape Plan into a hit. The team-up flick brought in $3.36 million yesterday and is headed for a $9.5 million debut weekend. That tops the $6.3 million and $4.55 million opening weekends, respectively, of Arnold's The Last Stand and Sly's Bullet to the Head earlier this year, but unfortunately, still leaves Escape Plan in flop territory. With a 71 percent Flixster score (and dropping) at the time of writing, audience reception doesn't appear to be very positive.

The Fifth Estate is also heading toward a disappointing weekend. The WikiLeaks movie bagged $0.587 million yesterday, putting it on course for a $1.7 million weekend. Those figures are very similar to the $1.4 million first day and $4.1 million opening weekend of Rendition on the same weekend back in 2007, another government-related conspiracy thriller that failed to leverage its moderate star power (though it arguably had a bit more than Estate). Word-of-mouth is tanking early with a disastrous 48 percent Flixster score.

Meanwhile, Fox's 12 Years a Slave saw a limited debut in 19 theaters and rang up $274,691 yesterday. Director Steve McQueen's period drama has been getting rave reviews from critics since its festival debut last month and is considered one of the early Oscar frontrunners. The film has earned a 96 percent score from 106 critics on Rotten Tomatoes thus far, as well as a strong 93 percent score from Flixster users. The brutal nature of the film's depiction of slavery could be a deterrent for mass consumption by an audience when the November 1 wide release arrives, but time will tell. For now, 12 Years is off to a solid start and should bank approximately $0.95 million this weekend.

* = Lee Daniels' The Butler won the 4-day Labor Day weekend after placing first in its first two weekends, however, it did not win the standard 3-day weekend ahead of the holiday.

Friday Update #2: Sources tell BoxOffice that Gravity will easily stay #1 during its third weekend of release. The space flick could hit more than $30 million this weekend, which will give it around $170 million in North America alone.

Carrie looks to be on pace for a respectable $20 million. The recent success of Insidious: Chapter 2--a $79 million domestic hit--may have taken a chunk out of Carrie's potential audience. The horror flick could surge close to Halloween.

Escape Plan looks like it will fall shy of $10 million with $8 million-$9 million during its debut frame. After the failure of The Last Stand and Bullet to the Head, audiences are making it clear that they only want to see Sylvester Stallone and Arnold Schwarzenegger in establish properties.

The Fifth Estate is the weekend's biggest loser by a long shot. An anemic haul of around $3 million looks likely for the Julian Assange biopic.

Critics aren't exactly in love with Carrie, but a 45% approval rating on RottenTomatoes is far from a disaster. It's certainly not bad enough to sway a large portion of moviegoers away from the film. Nearly 40,000 Flixster users have combined to give Carrie an underwhelming grade of 74%.