'Anchorman 2': Why Paramount's Holiday Tentpole Is Kind of a Big Deal; Can It Join the $200 Million Domestic Club? 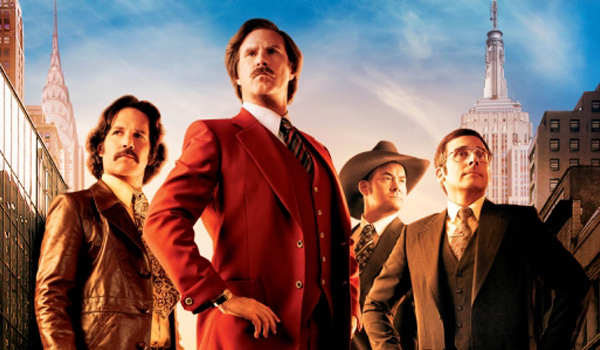 Did you know Will Ferrell has a new movie coming out?

Unless you've been living under a rock, Anchorman 2: The Legend Continues has probably found a way to permeate its existence into your life over the past few months. The whole shebang started in March 2012 when, on Conan, Ferrell himself made it official that an Anchorman sequel was going into production.

That was just the tip of the iceberg.

His Ron Burgundy character has since helped Chrysler Group boast a 59 percent year-to-year jump in sales while promoting their Dodge Durango. From his own Ben & Jerry's ice cream flavor to interviewing Peyton Manning, last week's Saturday Night Live appearance, a line of underwear from Jockey, anchoring a local North Dakota newscast, a duet with Robin Thicke, and much more, Farrell and his newsman persona have been churning out viral bits like clockwork. And we think it's about to pay off with big box office returns.

Padding the strength of the marketing campaign is the fact that moviegoers have eaten up comedy like candy in 2013. The year has delivered an impressive string of hits from the genre, beginning with February's Identity Thief ($134.5 million). Summer built the trend with This Is the End ($101.5 million), The Heat ($159.4 million) and We're the Millers ($150.4 million) before Paramount's own Jackass Presents: Bad Grandpa walloped box office expectations with a $100+ million stateside haul. Even The Hangover Part III did profitable business thanks to its overseas performance.

Anchorman 2, though, is the pièce de résistance. Fans have begged for a sequel to 2004's original flick--a modest box office hit that significantly bolstered its following in the post-theatrical market, becoming one of the most oft-quoted and meme'd comedies of the last decade. At the time, Ferrell was mostly known to the masses as "that funny guy from SNL and Elf". For the last eleven years, he's built a consistent resume of hit laughers with only a few misses in between. Transforming into comedy's leading man, the cult-like status of the first film has evolved into legit franchise-like buzz beyond his core fan base.

Underlining the change in circumstances since 2004, supporting players Paul Rudd and, especially, Steve Carell have also gone on to become popular leading men since the first flick's $85.3 million run.

Ben Stiller's Meet the Fockers makes for another apt comparison. The first Meet the Parents sequel improved upon its' breakout predecessor by 68 percent ($279.3 million) when it shifted to a late December release in 2004.

Naturally, strong online buzz is expected for Anchorman 2 given its target audience, but that doesn't undermine its stature as the Flixster community's most anticipated comedy of the year. With one week to go, the film has generated an impressive 98 percent "want to see" score from nearly 68,000 users. Only seven other movies from 2013 have garnered that many votes before release; six of them grossed over $200 million in North America.

Twitter is similarly abuzz for the return of the Channel 4 News Team, currently generating a 27 percent higher level of active discussion than last year's Ted at the same point. That figure skyrockets to 47 percent when compared to a fellow comedic sequel: 2011's The Hangover Part II, which banked $254.5 million at home and $581.5 million globally. Note, however, that Twitter patterns have evolved since then as its user base continues to grow.

For Paramount, Anchorman 2 represents their first major tent pole release since summer's Star Trek Into Darkness and World War Z, likely accounting for some of their reasoning behind the sequel's massive global push. Still, the degree of ad saturation achieved by the studio speaks to more than just the necessity for another box office hit; it also indicates a great amount of confidence in what Farrell and director/creative partner Adam McKay have cooked up.

Social media marketing is a constantly evolving machine, but there's little doubt that Ferrell and Paramount are in the final stretch of a game-changing campaign--one that may deserve to be heralded as the most creative and effective ad campaign for any movie this year, and any comedy...well, maybe *ever*. It's only a matter of time before another comedy tries to recapture this kind of synergy.

Where this pic stands on its own is in its pent-up demand and consistently strong buzz. Will that translate to more casual moviegoers buying tickets? Probably. Ferrell's career has been building toward this sequel--the first he's ever made to one of his movies--after the great successes that were Elf, Talladega Nights: The Ballad of Ricky Bobby, and The Other Guys (his top three non-animated box office earners).

The BoxOffice team's official Anchorman 2 forecast, as of December 10, is for a strong $185 million North American run. Also on the table are good chances at surpassing Megamind ($321.9 million) and Elf ($220.4 million) as Ferrell's top worldwide grossers should word of mouth live up to the overflowing hype. Joining the $200 million domestic club is no easy prospect with a highly competitive holiday slate of new releases, but if there's any comedic anchor who can do it, Will Ferrell's Ron Burgundy is as good a candidate as any.

How much do you think Anchorman 2: The Legend Continues will make at the box office? Join the discussion on the BoxOffice Forums!

The Anchorman 2: The Legend Continues trailer: