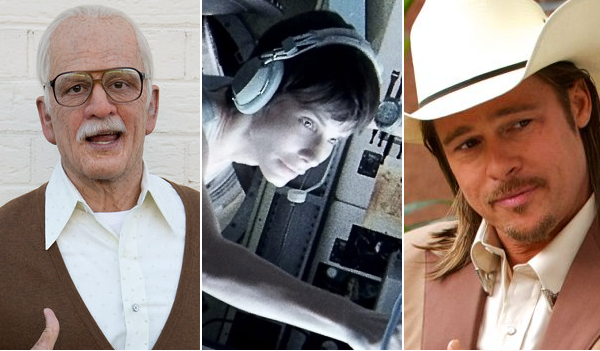 Sunday Update: Paramount's Jackass Presents: Bad Grandpa led the way this weekend with an estimated $32.0 million. The modestly budgeted Jackass spin-off starring Johnny Knoxville exceeded pre-release expectations and ended the thee-week first place run of Warner's Gravity in the process. Bad Grandpa opened 10 percent stronger than the $29.00 million debut of 2006's Jackass: Number Two and 36 percent below the $50.35 million start of 2010's Jackass 3D. It should be noted that Bad Grandpa wasn't expected to perform anywhere near as strong as Jackass 3D due in part to its spin-off nature and lack of higher priced 3D admissions. Bad Grandpa registered the third largest unadjusted Halloween weekend debut of all-time (behind only 2011's Puss in Boots and 2006's Saw III).

Jackass Presents: Bad Grandpa opened with $12.62 million on Friday (which included an estimated $1.4 million from late night Thursday shows), fell 9 percent to gross $11.54 million on Saturday and is estimated to fall 32 percent on Sunday to take in $7.84 million. With an estimated opening weekend to Friday ratio of 2.54 to 1, Bad Grandpa appears that it will be less front-loaded that Jackass 3D was and possibly less front-loaded that Jackass: Number Two as well. The film received a respectable B rating on CinemaScore.

Although Gravity fell to second place this weekend, the blockbuster 3D sci-fi drama still took in a very strong estimated $20.3 million in its fourth weekend of release. Gravity is now on the brink of reaching the $200 million domestic milestone with a 24-day take of $199.81 million. The film is set to reach the milestone on Monday, and could still possibly reach the milestone today if it were to exceed Sunday's estimate. Gravity is currently running 12 percent behind the $227.64 million 24-day take of 2010's Inception (which fell 33 percent in its fourth weekend to gross $18.51 million). With Gravity falling a healthy 32 percent this weekend, the film should continue to hold up well going forward. The total gross to opening weekend ratio for Gravity already stands at an impressive 3.58 to 1.

Gravity grossed $4.88 million from IMAX locations this weekend. That brings the film's IMAX total to $45.16 million, which accounts for 22.6 percent of the film's overall domestic gross.

Sony's Captain Phillips also held up very well this weekend. The Paul Greengrass directed awards season hopeful starring Tom Hanks was down just 28 percent to claim third with an estimated $11.8 million. Captain Phillips is projected to pass the $70 million mark today and has grossed $70.07 million through 17 days. Captain Phillips continues to outpace expectations and is currently running 9 percent behind the $76.94 million 17-day take of 2006's The Departed (which fell 29 percent in its third weekend to gross $13.46 million). The total gross to opening weekend ratio for Captain Phillips is currently 2.72 to 1.

The Counselor debuted in fourth place with a very lackluster estimated $8.0 million. The modestly budgeted Ridley Scott directed ensemble crime thriller debuted below already scaled back expectations. Despite a strong cast that includes Michael Fassbender, Javier Bardem and Brad Pitt, moviegoers simply weren't interested. The Counselor was clearly hurt by poor critical reviews and from arriving on the scene at the end of the logjam of dramas and thrillers aimed at adult moviegoers throughout September and October. Ridley Scott also has a hit and miss history at the box office, with The Counselor clearly joining the list of misses. The opening weekend performance of The Counselor was very similar to the $7.71 million start of Fox's recent Runner Runner. With a soft estimated opening weekend to Friday ratio of 2.50 to 1 (the film grossed $3.20 million on Friday) and a terrible D rating on CinemaScore, The Counselor is very likely to fade away from theatres quickly.

Cloudy with a Chance of Meatballs 2 rounded out the weekend's top five with an estimated $6.1 million. In the process, Sony's 3D computer animated sequel will surpass the $100 million domestic milestone today (the film's 31st day of release). The 31-day total for the film stands at $100.61 million. Cloudy with a Chance of Meatballs 2 has benefited from having had the family marketplace mostly to itself over the past month, but will face new competition beginning this coming Friday with the release of Relativity's Free Birds.

Sony's Carrie and Lionsgate's Escape Plan both stumbled in their respective second weekends of release. Carrie didn't receive a Halloween weekend bump after all as it was down a sharp 63 percent from last weekend to land in sixth with an estimated $5.9 million. Escape Plan held up slightly better, falling 56 percent to place in seventh with an estimated $4.34 million. Respective ten-day starts stand at a modest $26.02 million for Carrie and at a soft $17.42 million for Escape Plan.

On the limited front, Fox Searchlight's 12 Years a Slave had a solid, but not spectacular expansion this weekend. The Steve McQueen directed awards season hopeful grossed an estimated $2.15 million from 123 locations to place in eighth among all films. 12 Years a Slave increased 133 percent over last weekend and earned a per-location average of $17,480 for the frame. In comparison, 2007's No Country For Old Men increased 151 percent in its second weekend to gross $3.08 million from 148 locations. With a ten-day start of $3.41 million, 12 Years a Slave is running 30.5 percent behind the $4.91 million ten-day take of No Country For Old Men. While it is still very early, given its performance thus far, 12 Years a Slave may need additional help from year end critics groups if it is to break out at the box office. 12 Years a Slave is scheduled to expand into nationwide release on Friday.

In other platform news, IFC Films' Blue is the Warmest Color was off to a noteworthy start with an estimated $101,116 from four locations in New York and Los Angeles. The highly hyped NC-17 rated lesbian romantic drama and winner of this year's Palme d'Or at Cannes earned a promising per-location average of $25,279 for the weekend. Meanwhile, Roadside's All Is Lost grossed an estimated $517,700 from 81 locations for a per-location average of $6,391. The drama starring Robert Redford has grossed $655,887 through ten days of platform release.

Saturday Update: Paramount reports that Jackass Presents: Bad Grandpa bagged an estimated $12.62 million on Friday (including $1.4 million from Thursday night sneaks)--enough to dethrone Gravity from first place. While down considerably from the $22 million opening day of Jackass 3-D three Octobers ago, that figure is still healthy and in line with Jackass Number Two's $11.8 million first day back in 2006. For the weekend, BoxOffice expects Bad Grandpa to bring in $30.0 million.

Several factors are contributing to the drop-off from 2010's most recent franchise sequel. Namely, the plot-driven spin-off angle with Grandpa didn't interest audiences as much as the straight-up antics for which the Jackass crew have become known for over the years. While Johnny Knoxville is undoubtedly the brand's star, the lack of his entire supporting crew didn't help either. In addition, unlike the 2010 threequel, Bad Grandpa was not released in 3D--bumping down potential grosses this time. Lastly, July's relatively late release announcement resulted in unusually modest social media activity all the way up to release. All of that being said, Bad Grandpa is still a victory for Paramount with the comedy's low budget. Early word of mouth appears solid with a 78 percent Flixster score as of this morning, putting in the same general company of previous Jackass flicks.

This weekend's other new release came in significantly behind the pack. The Counselor tallied $3.2 million on Friday and is projected to pull $9 million for the weekend. Ridley Scott's thriller failed to generate commercial interest in large part due to the fact that adult crowds have their hands full with Gravity and Captain Phillips as is--a reality that also recently sunk Runner Runner. The marketing campaign also did little in the way of giving moviegoers a clear idea of what the film was about, instead relying on ads that pimped out the high profile names of the cast instead of the pic's story. Reviews and word of mouth are in the cellar, too, with only 36 percent of Rotten Tomatoes critics approving of the film and 40 percent of Flixster users still giving it a vote of confidence--both well below the levels of Scott's Body of Lies, which similarly disappointed with its October 2008 opening weekend of $12.9 million.

Expanding into 123 theaters this weekend, 12 Years a Slave earned $0.62 million on Friday, a 126 percent increase from last Friday when the critically lauded drama debuted to $0.274 million in 19 theaters. The increase is somewhat similar to the 152 percent jump No Country for Old Men enjoyed on its second Friday when it expanded into 148 theaters back in 2007, however, 12 Years' per-theater-average is lower at $5,041 (versus No Country's comparable day of $6,014) despite playing in fewer theaters throughout its debut so far. For the weekend, 12 Years a Slave is projected to add $2.1 million. While Steve McQueen's film is showing early signs that a wide mainstream audience may be hard to find in the coming weeks, it's a long road ahead with Oscar season and its potential benefits still to come. In the mean time, we're keeping expectations reserved going into the film's wide expansion on November 1.

Friday Update #2: Jackass Presents: Bad Grandpa will easily finish in first place this weekend. Sources tell BoxOffice that the raunchy comedy is looking at around $28 million based on early Friday grosses. If word of mouth stays strong, then Bad Grandpa could easily hit $30 million.

Gravity looks to be on pace for $21 million. The space flick's run in first place will finally come to an end after ruling the box office for three straight weekends. A $21 million haul will be good enough to push Gravity past the $200 million mark in North America.

The Counselor proves yet again that A-list stars do not guarantee strong box office results. The 20th Century Fox drama is headed for an underwhelming debut of $11 million.

Friday Update #1: Paramount reports that Jackass Presents: Bad Grandpa roped in a healthy $1.4 million from Thursday evening shows. That's a bit lower than the $2.3 million that Grown Ups 2--another raunchy comedy aimed mostly at males--roped in from Thursday preview shows this past July. Grown Ups 2 debuted to a healthy $41.5 million.

Critics are actually being surprisingly kind to Bad Grandpa. The Paramount comedy currently boasts a healthy 64% approval rating on RottenTomatoes.com. Of course, Bad Grandpa definitely falls in the critic-proof category. Nobody is looking to The New York Times to see if Johnny Knoxville's latest is a significant cultural achievement worthy of Oscar attention.

On Flixster, more than 18,000 users have combined to give Bad Grandpa a promising 82% approval rating, which bodes well for its potential as the weekend progresses.