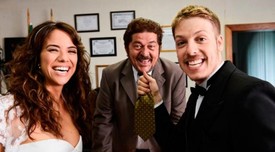 Romantic comedy Meu Passado Me Condena opened in first place in Brazil over the weekend. The film stars Fabio Porchat and Mia Mello as newlyweds who find themselves sharing a Honeymoon cruise with their exes…who have also gotten married to each other and, apparently, use the same travel agent. The high-concept comedy proved to be a big hit with Brazilian audiences, earning $2.3 million from 411 screens to dethrone Gravity as the country’s top film. Meu Passado Me Condena also led the per-screen average category with $5,698.

Gravity settled for second place in its third frame in Brazil. The sci-fi film posted a $1.1 million hold from 319 screens, a 26% drop from the previous weekend. Gravity has grossed a total of $6 million during its Brazilian run. Cloudy With a Chance of Meatballs 2 has proved to be resilient in Brazil, finishing its fourth frame in third place with an $844K outing from a market-leading 590 screens. The animated sequel has grossed a total of $11.9 million in Brazil.

Brazil was the only major overseas territory where Ridley Scott’s The Counselor shared a day-and-date premiere with North America. The Counselor has suffered nearly unanimous derision from critics and stumbled out of the gate at the North American box office. A limited release in 158 screens put the The Counselor in fourth place with a $534K bow. The $3,384 per-screen average gives it a competition edge heading to its second weekend, where The Counselor will need to expand in order to gain momentum.