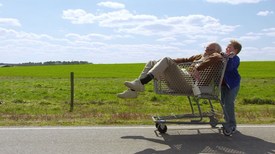 Bad Grandpa roared into German theaters over the weekend, bringing in a $3.1 million first place finish. The geriatric spin-off posted the best opening in the Jackass franchise in Germany. Bad Grandpa played in 285 screens, less than a third of the screens dedicated to fellow opener Cloudy with a Chance of Meatballs 2. The Cloudy sequel posted a $2.9 million debut in Germany, improving upon the $1.6 million bow of the original.

Gravity fell to fourth place in its fourth weekend in release with a $1.5 million take from 598 screens. The sci-fi film is already a hit in Germany with a $13.5 million cume. Turbo has grossed a total of $8.4 million over the same timespan. Ender’s Game disappointed with a debut in the bottom half of the table. The latest adaptation of a young adult literary series opened in 409 screens to a $796K bow, averaging $1,948 per-screen.