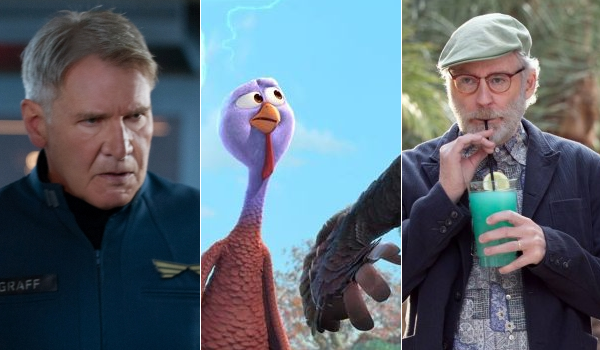 Sunday Update: Lionsgate's Ender's Game debuted in first place this weekend with an estimated $28.0 million. The sci-fi film starring Asa Butterfield and Harrison Ford debuted in line with pre-release expectations. Ender's Game opened in the same neighborhood as the respective $29.81 million and $27.52 million debuts of Elysium and After Earth earlier this year. Going forward, Ender's Game will hope to display holding power more along the lines of Elysium than After Earth, though that may be easier said than done with Disney's Thor: The Dark World and fellow Lionsgate release The Hunger Games: Catching Fire both entering the marketplace in the coming weeks.

Ender's Game opened with $9.84 million on Friday (which included an estimated $1.4 million from early shows on Thursday night), increased 10 percent on Saturday to gross $10.80 million and is estimated to fall 32 percent to take in $7.36 million on Sunday. That gave Ender's Game an estimated opening weekend to Friday ratio of 2.85 to 1. The audience breakdown for the film skewed towards male moviegoers (58 percent) and towards moviegoers over the age of 25 (54 percent). Ender's Game received a solid B+ rating on CinemaScore.

Holding up surprisingly well this weekend was Paramount's Jackass Presents: Bad Grandpa. The Jackass spin-off starring Johnny Knoxville fell 36 percent from last weekend to place in second with an estimated $20.5 million. Bad Grandpa held up significantly better than previous Jackass films, as good word of mouth and last weekend's debut possibly being deflated a bit by Halloween weekend festivities both helped out the film this weekend. In comparison, 2006's Jackass: Number Two fell 50 percent its second weekend to gross $14.61 million, while 2010's Jackass 3D declined 58 percent to gross $21.31 million. With a healthy ten-day start of $62.06 million, Bad Grandpa is currently running 19 percent ahead of the $52.07 million ten-day take of Jackass: Number Two and 29 percent behind the $86.86 million ten-day gross of Jackass 3D.

It was a close race for third place this weekend between fellow newcomers Last Vegas and Free Birds. Based on studio estimates, CBS Films' ensemble comedy Last Vegas has the edge with a third place take of $16.52 million. That outpaced the $16.20 million estimated fourth place take of Relativity's 3D computer animated Free Birds by an estimated $320,000 for the frame. Last Vegas opened on the high end of expectations, while Free Birds debuted towards the lower end of expectations. Going forward, both films will hope to hold up well in the weeks ahead; Free Birds in part from aid from the approaching Thanksgiving holiday and Last Vegas in part from skewing towards older moviegoers.

Warner's Gravity rounded out the weekend's top five with an estimated $13.13 million. The 3D sci-fi blockbuster was down 35 percent from last weekend, which represented a very solid hold given that the film lost its IMAX screens to Ender's Game this weekend. Gravity has grossed $219.196 million through 31 days of release, which currently ranks the film as the eighth highest grossing release of 2013. Before much longer Gravity will surpass the $228.78 million gross of Star Trek Into Darkness to move into seventh place.

Captain Phillips also continued to hold up well this weekend with an estimated sixth place take of $8.5 million. The awards season hopeful from Sony was down 27 percent from last weekend and has grossed $82.55 million in 24 days. That leaves Captain Phillips $17.45 million away from reaching the $100 million domestic milestone.

On the limited front, Fox Searchlight's 12 Years a Slave expanded well this weekend with an estimated $4.6 million from 410 locations. That gave the Steve McQueen directed awards season hopeful a per-location average of $11,220 for the frame. The film's location average was down 35 percent from last weekend (when it was playing in only 123 locations), which is a good sign for the film going forward. 12 Years a Slave has grossed $8.76 million through 17 days of limited release.

Elsewhere in limited release, Universal's About Time debuted with an estimated $1.06 million from 175 locations. That gave the sci-fi romance starring Domhnall Gleeson and Rachel McAdams a relatively modest per-location average of $6,045 for the frame. About Time is currently scheduled to play in 1,200+ locations next weekend.

Focus' Dallas Buyers Club was off to a more noteworthy start in platform release. The awards season hopeful starring Matthew McConaughey grossed an estimated $264,128 from 9 locations, giving it a very solid per-location average of $29,348. Dallas Buyers Club will expand into additional markets next weekend.

Saturday Update: Lionsgate reports that Ender's Game launched to $9.9 million on Friday, including Thursday evening's $1.4 million from early shows. That puts the flick on pace for a possible $28 million opening weekend if younger audiences continue turn out over the weekend. The first day returns were on par with After Earth's $9.8 million and 25.5 percent behind Oblivion's $13.3 million, however, Saturday matinees could yet prove to be strong for Ender's.

Early word of mouth for the adaptation appears decent with the film's Flixster score remaining at 76 percent since early Friday (after the fan base drove Thursday night's shows). The competition from Thor: The Dark World starting next week is likely to cut short legs, however, the holiday season could help Ender's Game to ultimately find solid footing.

Last Vegas debuted to a healthy $5.1 million yesterday, not too far off from the $6.35 million first day of summer's Red 2 despite Vegas not being a sequel with built-in appeal. The CBS Films release mounted a campaign that successfully targeted older crowds for the start of a month that will be heavy on younger-leaning films. Critics haven't taken to the film (giving it a disappointing 41 percent on Rotten Tomatoes), and while Flixster stands at an underwhelming 72 percent right now, that social media platform generally caters more toward younger crowds. CinemaScore was a much stronger "A-". BoxOffice projects Last Vegas will total $15.3 million for its debut weekend.

On the platform front, 12 Years a Slave took in $1.265 million after its expansion into 410 theaters this weekend for an average of $3,085 per theater on Friday. The film's cume is now $5.425 million as it heads toward a projected $4.4 million weekend. By comparison, No Country for Old Men earned $3,605 per theater from its third weekend expansion into 860 theaters. 12 Years will need to continue building on its superb critical buzz in order to connect with mainstream crowds over the next few months.

Friday Update #2: Sources tell BoxOffice that Ender's Game could end up with $33 million during its debut frame. If word of mouth is strong enough, the sci-fi flick could even hit $35 million. Anything above $30 million would mark a solid opening for the Lionsgate release. It's important for Ender's Game to make as much as it can this weekend because the release of Thor: The Dark World next weekend will definitely hurt it. Either way, with the combined strength of Ender's Game and The Hunger Games: Catching Fire, Lionsgate is poised to have a healthy month of November.

Free Birds could end up with as much as $18 million in the bank. That's a modest start for Relativity's animated flick. The market has not been kind to animated films as of late and even established properties such as the The Smurfs and Planes have had a tough time meeting expectations.

CBS Films has a winner on their hands with Last Vegas. Early projections indicate that the comedy could hit as much as $16 million during its debut frame. The adult-skewing film should hold up well in the weeks to come considering that moviegoers over 35--the core audience on this one--don't have the same rush-out mentality as younger patrons.

Friday Update #1: Lionsgate reports that Ender's Game managed $1.4 million from Thursday evening shows. That puts it comfortably ahead of the $1 million haul that After Earth--another sci-fi flick focused on a young, male protagonist--managed from Thursday preview shows. After Earth managed a debut of $27.5 million even though it was hindered by negative buzz.