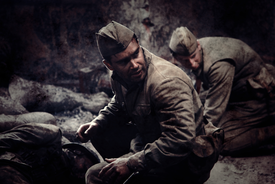 Stalingrad posted one of the best weekends of all time for a non-American foreign film in China. The Russian submission to the Academy Awards has already grossed $47.8 million its home country, becoming the most successful domestic film of all time in the Russian box office. Stalingrad expanded to China over the weekend and topped the box office with an $8.28 million bow. The WWII historical epic dethroned The Wolverine’s consecutive weeks atop the box office, with the superhero spin-off sequel settling for a $6.59 million second place finish. The Wolverine has grossed a total of $39.71 million in China.

Hotel Transylvania had a third place debut with a $5.71 million bow. Special ID moved down to fourth place in its third frame with a $3.48 million take that brings its domestic total to $24.68 million. The Arnold Schwarzenegger vehicle The Last Stand was resilient in its second frame with a $2.99 million hold that brings its Chinese cume to $7.79 million. The Last Stand might see its business drop in the following frame after Escape Plan opened in theaters on Monday. Now You See Me has also been able to show legs nearly a month into its Chinese run. The magic heist film has already grossed a total $22.95 million after 25 days in China.