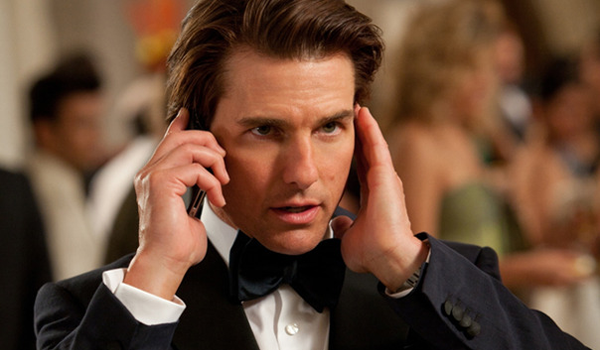 Paramount announced last week that Tom Cruise's Ethan Hunt will return in Mission: Impossible 5 on Christmas Day 2015. At first glance, the date makes perfect sense: Ghost Protocol revitalized the franchise with its successful 2011 holiday run, serving out the first non-summer launch for the series. But Ghost Protocol didn't have to compete with a little movie called Star Wars: Episode VII.

They seem to be aiming for a repeat of December 2009's record market performance driven by a co-existence of marquee blockbuster titles. James Cameron's Avatar (having opened December 18) was beginning its long and fruitful run while, simultaneously, Warner Bros. and Guy Ritchie successfully reimagined Sherlock Holmes over Christmas weekend (to say nothing of Fox's success with Alvin and the Chipmunks: The Squeakquel). Holmes may not have won first place, but it was a big hit under Avatar's shadow nonetheless.

Unfortunately, Mission: Impossible 5 faces a tougher uphill battle than the famous detective. Regardless of your opinion on Tom Cruise, his public image has taken another hit recently. His box office stature sharply contrasts that of Robert Downey, Jr., who was fresh off the breakout success of Iron Man and hitting the stride of his career resurgence when Sherlock Holmes opened. Contrary to any 1990s status quo, Cruise's drawing power just isn't what Downey's is anymore (as evidenced by the lackluster domestic box office performances of Jack Reacher and Oblivion).

What about Star Wars? Take this to the bank: it won't be Avatar--a film that opened very well but built its legs in the weeks and months after its debut. Episode VII should handily top that film's $77 million domestic opening, and may even have a crack at besting its $75.6 million sophomore weekend if moviegoers like what they see and/or wait until Christmas to check out the highly anticipated sequel. Translation: the more money audiences spend on a four-quad movie like Star Wars (or the adult-skewing Inferno and Live By Night, for that matter), the less market share there will be for Mission: Impossible 5--especially when assuming that Disney will secure IMAX theaters well into early 2016. That format played a major role in helping Ghost Protocol correct its franchise's box office course, and Mission's powers-that-be should revisit it.

This isn't the first time Paramount has risked one of their lucrative properties being overshadowed by competition. Earlier this year, Star Trek Into Darkness--though a solid performer overall--failed to reach the levels of its 2009 predecessor despite positive critical reactions and word of mouth. Combined with a butchered marketing campaign, its underwhelming box office can be largely attributed to a lack of interest from younger audiences who instead swiped their debit cards for Iron Man 3, Fast & Furious 6, and even the surprise breakout that was The Great Gatsby (although that remake skewed older).

Of course, the scope is wider than North America as Tom Cruise's bankability remains strong with overseas audiences. Oblivion earned 69 percent of its $286 million from foreign territories, while Ghost Protocol's international returns accounted for nearly 70 percent of that film's $693 million global take. It's realistic, and maybe even likely, that Mission: Impossible 5 could improve upon its predecessor's global earnings even if domestic returns dip. Such is the nature of studio thinking in the globalization era of the box office.

The Mission franchise already managed one miraculous comeback--how many times can a phoenix rise from the ashes? That's not to suggest the series lacks momentum (moviegoers really dug the most recent flick), but it's a key note for a brand that has seen its ups and downs. December 2009 is a great precedent in its favor for 2015, but let's not forget that it may also be the exception to the rule. After all, Sherlock Holmes: A Game of Shadows was trumped by Ghost Protocol itself two years ago, contributing to the former's franchise prospects sliding into a state of ongoing ambiguity. Opening one week after a guaranteed blockbuster doesn't spell automatic doom for Mission: Impossible 5, but it again leaves the series with very little margin for error.

What do you think, readers? Should Paramount reconsider opening Mission: Impossible 5 in a slightly less crowded market space such as Memorial Day 2015 or 2016?