RUSSIA: 'Thor: The Dark World' Set to Double Gross of the Original 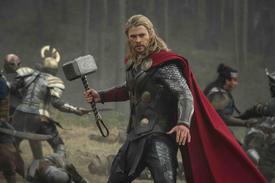 Thor: The Dark World became the fifth-highest grossing film of the year in Russia after a $5 million weekend pushed the superhero sequel’s cume past the $30 million mark. The Thor sequel has now grossed nearly twice as much as its predecessor’s $16.4 million take.

Carrie opened in 820 screens to take second place, posting a $4.8 million bow and $5,881 per-screen average. The horror film put in a stronger performance than fellow opener Last Vegas, which settled for third place with a $3.3 million debut.

Russian hits Gorko! and Stalingrad continued to enjoy success in their respective runs. Stalingrad reached a $51.6 million total in its home country while Gorko! added $1.5 million over the weekend to reach a $23.1 million domestic cume.