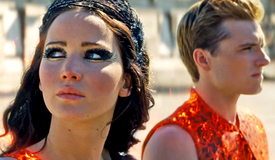 A slow weekend in Brazil left The Hunger Games: Catching Fire with the top spot at the box office. The Hunger Games sequel dropped 48% in its first hold, posting a $2.7 million weekend and reaching a $10.9 million cume in the market. The film is close to surpassing the original's $11.3 million cume.

Thor: The Dark World retained second place over the weekend with a $1.5 million take. The latest entry in the Marvel Cinematic Universe has grossed a strong $23.3 million in Brazil, making it one of the biggest hits of the year.

Romantic comedy Meu Passado Me Condena continued its strong run with a $1 million weekend. The domestic comedy forms a handful of domestic comedies to have broken through with local audiences and has grossed a total of $13 million.