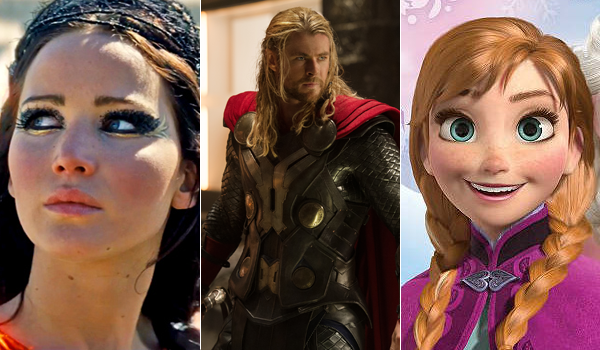 The holiday box office is in full swing thanks to a trio of November blockbusters. The Hunger Games: Catching Fire, Thor: The Dark World, and Frozen helped drive a $1.07 billion month--the second biggest November gross in history, and just 1.8 percent behind last year's penultimate month.

Those top three flicks combined for $545.4 million through November 30, or about 51 percent of the month's total gross. By comparison, November 2012's top three earners (Skyfall, The Twilight Saga: Breaking Dawn - Part 2, and Wreck-It Ralph) accounted for a somewhat larger share at 58 percent.

Rounding out the top films of the month were The Best Man Holiday, Ender's Game, and Last Vegas. October holdovers Jackass Presents: Bad Grandpa and Gravity also showed excellent staying power throughout November. You can view the month's top ten grossers below this story.

November boasted some shining moments, although most of them came in the final week when Lionsgate's Catching Fire broke the November opening weekend record with $158.1 million (besting New Moon's $142.8 in 2009) and proceeded to break the 3- and 5-day Thanksgiving records with $74.2 million and $109.9 million, respectively. Those figures shattered the long-standing records of $57.5 million and $82.4 million held by 2001's Harry Potter and the Sorcerer's Stone. (For those curious, the first Potter's 3-day Thanksgiving weekend gross would be approximately $82 million with today's ticket prices.)

Disney notably dominated the month as well. Thor: The Dark World reaffirmed the "Avengers bump" by posting a significantly higher debut ($85.7 million) than the first film, and is now on pace to become the first $200 million film in the Marvel Cinematic Universe without the presence of Robert Downey, Jr.'s Tony Stark/Iron Man character.

But, it was Walt Disney Animation's Frozen that has impressed most in recent days. Surpassing all expectations before release, the animated musical posted a massive $93.6 million 5-day opening over Thanksgiving weekend (including a $67.4 million 3-day weekend)--blowing away the $68.7 million 5-day start of Tangled back in 2010. The pic also surpassed Toy Story 2's 14-year-old records for 3- and 5-day Thanksgiving openings. With strong word of mouth, rave reviews, and a female-driven audience with few options in December, Frozen will sail past $200 million domestically and is poised to challenge Monsters University ($268.5 million) as Disney's best animated grosser in 2013.

The fourth quarter has rung up $1.7 billion since October began, just $61.5 million behind 2012's combined October and November grosses which toppled the previous best of $1.685 billion in 2009.

Looking ahead: December boasts another competitive release schedule, anchored by December 13's The Hobbit: The Desolation of Smaug. We expect a decrease in domestic returns from last year's An Unexpected Journey, although the stronger marketing campaign and (rumored) quicker pace of the film could strengthen Smaug's audience retention. December 18 will then see the long-awaited release of Anchorman 2: The Legend Continues, a film which has arguably executed the best pre-release ad campaign of the year through Will Ferrell's viral Dodge Durango commercials. We also expect Tyler Perry's A Madea Christmas (December 13) to ring up solid holiday business.

Check back in the days and weeks ahead for full analysis on December's high profile releases.