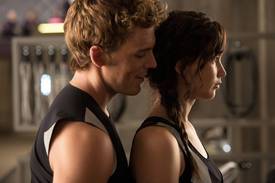 A $5.2 million hold put The Hunger Games: Catching Fire atop the Russian box office for the second consecutive weekend. The sequel is near the $20 million mark with a $19.4 million cume.

Oldboy failed to attract any significant interest in North America, leaving the overseas box office to pick up whatever it could to save Spike Lee’s remake. Oldboy flopped after premiering in 371 screens in Russia, taking a $407K bow and a $1,099 per-screen average –the lowest among all the films on the top ten chart.