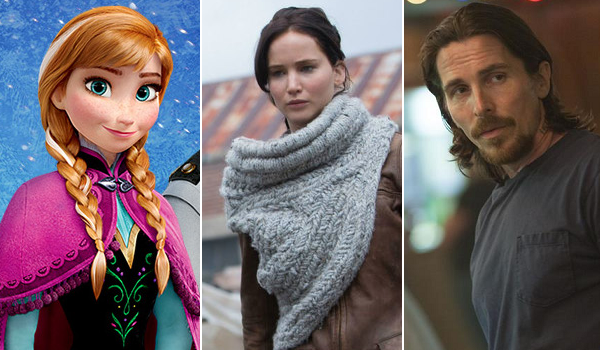 Sunday Update: In its second weekend of wide release, Disney's Frozen moved into first place with an estimated $31.64 million. With the 3D computer animated blockbuster from Walt Disney Animation moving ahead of The Hunger Games: Catching Fire in the weekend rankings, this weekend played out similarly to the post-Thanksgiving weekend frame back in 2010 when Tangled moved ahead of Harry Potter and the Deathly Hallows: Part 1 in the rankings (albeit with significantly higher grosses this time around). Frozen fell a solid 53 percent from last weekend's three-day frame and continues to exceed its already lofty expectations with $134.28 million after twelve days of wide release. That places Frozen 39 percent ahead of the $96.57 million twelve-day start of Tangled, which fell 56 percent in its second weekend to gross $21.61 million. With strong word of mouth and a relatively limited amount of new competition for family audiences in December, Frozen is likely to hold up very well going forward.

The Hunger Games: Catching Fire fell to second place with an estimated $27.0 million this weekend. Lionsgate's blockbuster sequel was down a hefty 64 percent fall from last weekend, which was quite understandable given the film's record breaking performance over Thanksgiving weekend. In comparison, Deathly Hallows: Part 1 fell 65 percent the weekend after Thanksgiving weekend to gross $17.02 million. With a massive 17-day start of $336.66 million, Catching Fire is running 38 percent ahead of the $244.52 million 17-day take of Deathly Hallows: Part 1 and 11 percent ahead of the $302.45 million 17-day gross of last year's The Hunger Games (which fell 43 percent in its third weekend to gross $33.11 million). It will be interesting to see whether or not Catching Fire is able to stabilize next weekend with the arrival of Warner's anticipated The Hobbit: The Desolation of Smaug in the marketplace on Friday.

Relativity's Out of the Furnace debuted in third place with a soft estimated take of $5.3 million. Despite a strong ensemble cast headlined by Christian Bale and Woody Harrelson, moviegoers simply weren't interested in the film. The weekend after Thanksgiving weekend is a notoriously tough frame to open new films, as audiences typically need a break after Thanksgiving weekend and before Christmas season releases enter the marketplace. Out of the Furnace opened 22 percent softer than the the $6.81 million start of last year's Killing Them Softly. While Out of the Furnace may hold up a bit better than Killing Them Softly did, it likely won't hold up all that well going forward given the amount of new competition for adult moviegoers entering the marketplace throughout the rest of December and the lackluster C+ rating it received on CinemaScore.

Disney's Thor: The Dark World placed in fourth with an estimated $4.74 million. Marvel's blockbuster superhero sequel was down 57 percent from last weekend. With a 31-day take of $193.64 million, Thor: The Dark World is running 14 percent ahead of the $169.12 million 31-day gross of 2011's Thor and is currently $6.36 million away from reaching the $200 million domestic milestone.

In other box office news, Paramount's Jackass Presents: Bad Grandpa will surpass the $100 million domestic mark on Sunday after grossing an estimated $0.855 million this weekend. The domestic total for the Johnny Knoxville led comedy stands at $100.056 million through Sunday.

Saturday Update: The post-Thanksgiving/first December weekend is historically a slow point in the holiday market, and this year is proving to be no exception.

Lionsgate reports this morning that The Hunger Games: Catching Fire earned $7.7 million on Friday, winning the day and putting it on track for a $27.5 million third weekend. To date, Catching Fire has earned $317.4 million domestically--12.5 percent ahead of the 15-day gross of the original Hunger Games.

Disney's Frozen claimed the runner-up spot on Friday with $6.815 million. It should, however, post strong enough Saturday and Sunday business to claim first place for the weekend when all is said and done. BoxOffice projects the hit animated film will tally $29 million in its sophomore weekend.

Through Friday, Frozen's 10th day of wide release, the pic has amassed an impressive $109.45 million. At the same point in release, Tangled had brought in 37 percent less (with $80.1 million) back in 2010. Aside from next week's The Hobbit: The Desolation of Smaug, competition for Frozen's family audience will be minimal throughout December. Look for sustained leg growth over the holidays as Frozen continues its bid to become Disney's top animated film of the year (currently summer's Monsters University with $268.5 million domestically).

As expected, Relativity's Out of the Furnace got off to a soft start on Friday. The Christian Bale starrer grossed $1.88 million in its first day of wide release (having opened in 4 theaters on Wednesday). That's noticeably less than the $2.5 million Killing Them Softly drew in its first day over the same weekend last year and puts Furnace on pace for a $5.5 million debut.

Furnace was hoping to cash in on the goodwill of Bale and supporting actors Woody Harrelson, Zoe Saldana, and Casey Affleck, as well as director Scott Cooper's critical success from Crazy Heart. Unfortunately, reviews disappointed with 52 percent of critics giving the film a fresh rating on Rotten Tomatoes. Early audience word of mouth doesn't appear strong either, with 68 percent of just over 17,000 Flixster users anticipating or having enjoyed the film.

Friday Update: Sources tell BoxOffice that Frozen will push The Hunger Games: Catching Fire out of first place this weekend.

Disney's latest animated flick is headed for as much as $36 million during its second weekend of wide release, which would put it at nearly $140 million in North America.

Catching Fire looks poised to make as much as $34 million, and that means the $350 million domestic mark is not far off.

Out of the Furnace could rope in $7 million during its first weekend of wide release.

Tags: Frozen, The Hunger Games: Catching Fire, Out of the Furnace