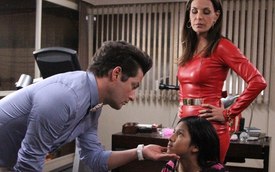 Cro led the Brazilian box office for the second consecutive weekend. The comedy TV spin-off has translated well to the silver screen, bringing in $4.3 million after ten days in release. Last Vegas and Carrie took soft debuts to round out the top three. Last Vegas took $1 million from the weekend while the horror reboot launched with a $931K bow.

The Hunger Games: Catching Fire broke the $15 million mark in Brazil, 50% ahead of the $10 million cume of the original. The Hunger Games sequel has grossed $340 million overseas.

Brazil is one of the top territories for the Thor sequel with a $26.5 million haul. Thor: The Dark World has grossed over $400 million worldwide, with Brazil being its fourth biggest market behind China ($51.3M), Russia ($36.2M), and the United Kingdom ($31.4M).

Don Jon struggled in limited release, opening in 165 screens for a $318K bow and $1,889 per-screen average. Don Jon has failed to make an impact overseas with a $10.8 million cume from 31 markets.