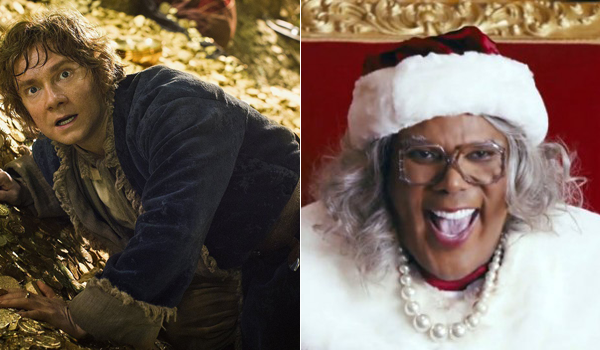 Sunday Update: Warner's The Hobbit: The Desolation of Smaug debuted in first place this weekend with an estimated $73.68 million. While that was a solid start, it was softer than widely expected and represented a significant 13 percent decline from the $84.62 million debut of last year's The Hobbit: An Unexpected Journey. It should also be noted that The Desolation of Smaug (and the marketplace in general) looks to have taken a bit of a hit on Saturday from Winter Storm Electra. Without adjusting for ticket price inflation, The Desolation of Smaug still delivered the fourth largest opening weekend ever in the month of December (behind only An Unexpected Journey, I Am Legend and Avatar).

The audience breakdown for The Hobbit: The Desolation of Smaug skewed towards male moviegoers (60 percent) and moviegoers over 25 years old (64 percent). Desolation of Smaug skewed a bit more towards male and older moviegoers than An Unexpected Journey did. The film grossed $9.18 million from IMAX locations this weekend, which represented 12.5 percent of this weekend's overall gross. 3D grosses were responsible for 49 percent of this weekend's gross (which represented the same opening weekend 3D percentage as An Unexpected Journey).

Disney's Frozen held up quite nicely this weekend with an estimated second place take of $22.18 million. The blockbuster 3D computer animated film from Walt Disney Animation fell just 30 percent from last weekend. Frozen has grossed a very impressive $164.39 million after 19 days of wide release. That places the film 42.5 percent ahead of the $115.396 million 19-day take of 2010's Tangled (which fell 34 percent in its third weekend to gross $14.33 million). With a limited amount of family options entering the marketplace over the rest of the holiday season, Frozen should continue to hold up very well going forward.

Tyler Perry's A Madea Christmas was off to a sluggish start this weekend with an estimated third place debut of $16.0 million. The latest Madea film from Lionsgate debuted well below pre-release expectations and easily delivered the softest debut ever for the Madea franchise (the previous low for a film starring Madea having been the $21.91 million debut of 2005's Diary of a Mad Black Woman). Making this weekend's debut even more surprising was the fact that A Madea Christmas had clearly been generating the highest level of online buzz ever for a Madea film. A Madea Christmas debuted 37 percent softer than the $25.39 million debut of last year's Madea's Witness Protection. The Madea franchise (and Perry's films in general) has historically been very front-loaded towards opening weekend. A Madea Christmas will hope to buck that trend with the aid of the holiday season, but whether it actually can remains to be seen.

Fellow Lionsgate release The Hunger Games: Catching Fire placed in fourth with an estimated $13.15 million. The blockbuster sequel starring Jennifer Lawrence fell 50 percent from last weekend. The film took a noticeable hit from the arrival of The Hobbit: The Desolation of Smaug (and from losing IMAX screens), but didn't fall off the box office map either this weekend. Catching Fire has grossed a massive $356.98 million through 24 days of release. That places the film 6 percent ahead of the $336.67 million 24-day take of last year's The Hunger Games (which fell 36 percent in its fourth weekend to gross $21.10 million).

Saturday Update: Warner Bros. reports that The Hobbit: The Desolation of Smaug earned an estimated $31.15 million on Friday, putting it on pace for a likely $75 million weekend. Those figures include the film's $8.8 million earned from midnight shows, representing just over 28 percent of opening day grosses--an improvement over the 35 percent midnight share of opening day for last year's An Unexpected Journey. IMAX accounted for 13 percent ($3.979 million) of Friday's haul. Overall, Smaug's opening day was 16 percent lower than its predecessor ($37.1 million).

Smaug's projected opening weekend will end up close to expectations following what looked to be lower grosses last night. Winter weather may be affecting things, although the lower share of midnights indicates that fans may have indeed been the audience sector where the most upfront demand was lost (as opposed to general audiences) in the wake of last year's mixed reception for the first Hobbit entry. Early word of mouth appears solid for Smaug so far with an "A-" CinemaScore and 88 percent of Flixster users liking or still anticipating seeing the film. With a crowded holiday schedule ahead, this second Hobbit pic is aiming to maintain most of its core family audience through Christmas and New Year's while also bringing in stronger overseas sales than Journey.

Tyler Perry's A Madea Christmas grabbed an estimated $5.74 million yesterday as the comedy heads toward a $16 million debut. The opening day figure is noticeably down a sharp 43 percent from Madea's Witness Protection's $10.15 million in June 2012. Although it is another possible victim of winter weather, A Madea Christmas is generally underperforming compared to tracking and Perry's own personal reputation for strong openings from his Madea brand. That said, the holiday theme of the comedy makes it a candidate to attract his fans closer to the Christmas holiday and result in a more backloaded run than his films typically see. A Madea Christmas currently boasts a solid 83 percent approval/anticipation rating on Flixster.

On the platform front, Sony's American Hustle bowed to $210,909 from 6 locations yesterday for a $35,152 per-theater average. Hustle should bring in a fantastic $700,000 for the weekend before its wide expansion on December 20. The star-studded cast and director David O. Russell's recent success with Silver Linings Playbook and The Fighter are paying off in a big way for one of the awards season's early favorites (nabbing 7 Golden Globe nominations this past week). By comparison, The Fighter tallied $98,521 on opening day from 4 locations ($24,630 per theater) on the same weekend three years ago.

Last, but certainly not least, Disney's Saving Mr. Banks also kicked off its run with a platform opening this weekend. The tale of the origins of Mary Poppins rang up an estimated $126,000 yesterday from 15 locations for an $8,400 per-theater average. That's in line with Finding Neverland's $8,125 first-day average from 8 locations back in November 2004. BoxOffice projects Saving Mr. Banks will take in $430,000 this weekend before it also expands nationwide next Friday

Friday Update #2: Early reports indicate that The Hobbit: The Desolation of Smaug is headed for an underwhelming $66 million opening frame, which would put it far behind the $84 million debut that The Hobbit: An Unexpected Journey managed last year. Saturday projections are pessimistic due to a winter storm that may keep many moviegoers home. Luckily, Smaug is already outpacing Journey overseas. Any domestic decline between the two films should be made up for by healthy receipts in key territories such as the UK, Germany, Russia, Brazil and China.

Tyler Perry's A Madea Christmas may end up with a $15 million debut. Perry's Madea films are usually very reliable at the box office, and this would easily be the weakest opening of the bunch.