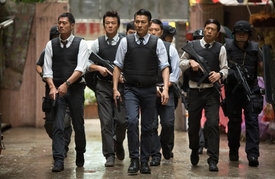 The Hong Kong action thriller Firestrom scorched through the Chinese box office in its four days of release. Firestorm led the weekly box office after a $27 million debut put it ahead of all other releases on the market, aided by the fact that the weekend saw no other films debut in wide release.

No Man's Land slipped to second place with a $13.63 million week. The long-delayed Chinese film has grossed a total of $35.92 million in two frames.

Action sequel The Four 2 moved down to third place after its first full week of release secured an additional $10.7 million for the film. The Four 2 has grossed a total of $25.22 million in ten days.

Hollywood fare had to settle for mid-table positions this week. Gravity added another $2.96 million to reach the $70 million milestone. Gravity is the third highest grossing Hollywood import of the year behind Iron Man 3 and Pacific Rim. Epic finished its third frame by earning $1.26 million to take its Chinese total to $7.36 million. The Hunger Games: Catching Fire recorded its first week under the million-dollar mark, contributing $770k to reach a $27.75 million cume. 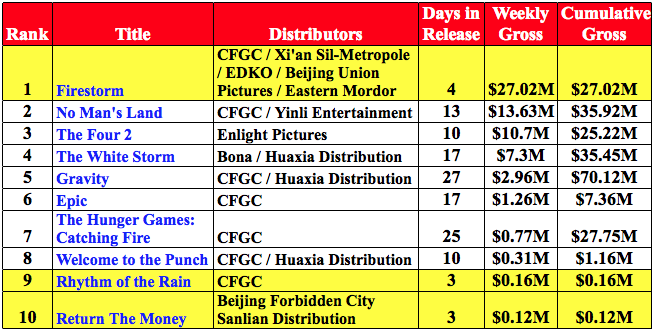