BRAZIL: 'The Hobbit: The Desolation of Smaug' Posts $4.8M Bow 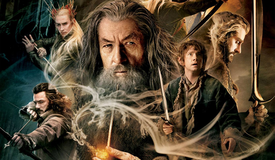 The Hobbit: The Desolation of Smaug posted a slight improvement over its predecessor's debut in Brazil. Smaug opened to $4.8 million in the market, a nudge above the $4.5 million bow of An Unexpected Journey. The first installment in The Hobbit trilogy went on to gross a $17.5 million total in Brazil, placing expectations for the current release in the proximity of $18 million.

Cro relinquished the top spot at the box office for a distant second place finish in its third frame. The Brazilian comedy, a soap-opera spin-off, has grossed $6 million domestically. The bottom of the table includes Meu Passado Me Condena, another Brazilian comedy hit, with a $15.1 million cume.

The Hunger Games: Catching Fire and Thor: The Dark World kept adding to their respective tallies. The Hunger Games sequel has accumulated $16.5 million at the Brazilian box office while the Thor sequel has already grossed over $27 million in the market.