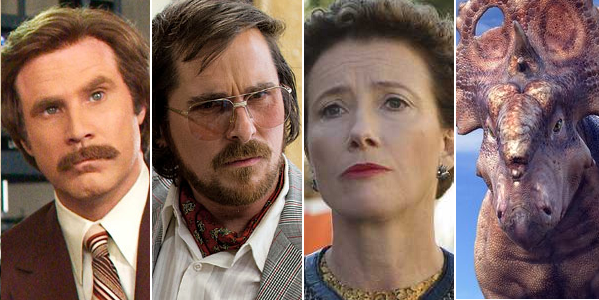 Sunday Update: Thanks in part to the softer than anticipated start of Paramount's Anchorman 2: The Legend Continues, Warner's The Hobbit: The Desolation of Smaug was somewhat unexpectedly able to remain in first place this weekend. The second installment of Peter Jackson's The Hobbit trilogy took in an estimated $31.46 million, which represented a 57 percent decline from last weekend's opening weekend performance. The film's second weekend hold was quite similar to that of last year's The Hobbit: An Unexpected Journey, which fell 56 percent in its second weekend to gross $36.89 million. With a solid ten-day start of $127.50 million, The Desolation of Smaug is running 15 percent behind the $150.04 million ten-day take of An Unexpected Journey. The Desolation of Smaug will hope to hold up slightly better than An Unexpected Journey did over the holidays, though that isn't a given with five new wide releases entering the marketplace on Christmas Day.

IMAX locations were responsible for $4.06 million (12.9 percent) of this weekend's overall gross for The Desolation of Smaug. The film has grossed $16.13 million in IMAX to date, which represents 12.6 percent of its total domestic gross thus far.

Anchorman 2: The Legend Continues debuted in second place with an estimated $26.78 million. Since opening on Wednesday the long awaited (and much buzzed about) comedy sequel starring Will Ferrell has grossed $40.0 million in five days of release. While Anchorman 2 is off to a respectable start with its reported $50 million production budget in mind, the film's performance thus far has been underwhelming given the lofty expectations of many and its inability to top The Desolation of Smaug for first place this weekend. With a five-day to three-day ratio of 1.49 to 1, it also appears as though moviegoers were fairly aware of the film's relatively late release date change to Wednesday after all. Anchorman 2 is currently running 11 percent behind the $45.08 million five-day December start of 2010's Little Fockers. Anchorman 2 should hold up fairly well over the holidays, though the film's so-so B rating on CinemaScore is a bit concerning.

Sony's American Hustle was off to a very healthy start in its first weekend of wide release with an estimated $19.1 million. The David O. Russell directed awards season hopeful opened on the high end of expectations and finds itself in a very close race for third place this weekend with Disney's Frozen (with Frozen having the slight edge in estimates). With the weekend estimates for the two films only separated by $63,000, the race for third obviously won't be decided until actuals are released on Monday. This weekend's gross for American Hustle was 57 percent stronger than the $12.14 million grossed by 2010's The Fighter in its first weekend of wide release. After an additional week of platform release, American Hustle has grossed $20.21 million to date. This weekend's performance was especially encouraging when considering that grosses are typically deflated the weekend before Christmas weekend. With strong reviews, continued awards buzz and the holidays ahead of it, American Hustle is likely to hold up very well going forward. American Hustle received a solid B+ rating on CinemaScore.

Frozen held up exceptionally well this weekend with an estimated $19.16 million. The blockbuster 3D computer animated film from Walt Disney Animation was down a very slim 15 percent from last weekend. This weekend's hold was especially impressive when considering that four new wide releases entered the marketplace this weekend. Thanks in part to continued strong word of mouth and relatively little direct competition for family audiences, Frozen continues to exceed expectations with $191.56 million after 26 days of wide release. That places the film 50 percent ahead of the $127.92 million 26-day take of 2010's Tangled. Frozen will soon zoom past the $200.8 million final domestic gross of Tangled.

Fellow Disney release Saving Mr. Banks debuted in fifth place with an estimated $9.32 million. The awards season hopeful starring Emma Thompson and Tom Hanks debuted slightly below expectations. Saving Mr. Banks likely took a direct hit from the healthy start of American Hustle with adult moviegoers this weekend, as there is typically only so much room at the box office the weekend before Christmas. Given that Saving Mr. Banks is skewing heavily towards older moviegoers (61 percent of its audience was 35 years and older) and going over well with initial audiences (the film received a strong A rating on CinemaScore), it is highly likely that the film will hold up extremely well throughout the holidays.

Fox's Walking with Dinosaurs debuted in eighth with an estimated $7.3 million. The 3D family film featuring computer animated dinosaurs opened on the low end of its modest pre-release expectations. Interest in the film among family audiences is clearly limited at this point given the film's lackluster start this weekend and the exceptional weekend hold of Frozen. However, family films typically hold up very well over the holidays, so it is likely that Walking with Dinosaurs experiences strong holiday holds going forward. Walking with Dinosaurs received a B CinemaScore rating.

On the limited front, Yash Raj Films' Dhoom 3 grossed an estimated $3.31 from 236 locations. That gave the Bollywood film a per-location average of $14,004 for the frame and represented the largest opening weekend performance ever for a Bollywood film in North America. The previous record was the $2.20 million opening weekend take of Chennai Express back in August.

In other box office news, Disney's Thor: The Dark World surpassed the $200 million domestic mark this weekend after grossing an estimated $1.33 million for the frame. Marvel's blockbuster superhero sequel has grossed $200.77 million to date.

Saturday Update: Paramount's official Friday estimate for Anchorman 2 is $8.7 million, putting the sequel on track for a three-day weekend of $28.5 million. Combined with Wednesday's and Thursday's grosses, that would give the flick a decent $41.7 million five-day start. The hyper-marketed comedy retained first place on Friday by an estimated margin of less than $100,000 over The Hobbit: The Desolation of Smaug. BoxOffice projects the second Hobbit pic will retain first place for the weekend as a whole.

Early word of mouth for Anchorman 2 appears to be a mixed bag. Following its "B" CinemaScore on Wednesday, 74 percent of Flixster users approve of or are anticipating seeing the film.

Sony reports that American Hustle swiped a strong $6.3 million yesterday as it expanded into nationwide release. The David O. Russell-helmed pic is on pace for a projected $19.2 million weekend. By comparison, The Fighter earned $3.94 million on its first day (toward a $12.1 million weekend) in nationwide release when it followed a similar release pattern in 2010. The awards contender should play well through the holidays with buzz from its Golden Globes nominations on top of very healthy word of mouth. Hustle's Flixster score currently sits at 88 percent.

Disney's Saving Mr. Banks cashed in $2.96 million as it also went into its nationwide expansion on Friday. BoxOffice projects the well-reviewed family-friendly drama will post a $9.2 million weekend, setting it up for a leggy holiday run in the same vein as 2011's We Bought a Zoo. Buzz for the film has largely been driven by Emma Thompson's performance and Tom Hanks' portrayal of the iconic Walt Disney, a combination which should continue attracting older audiences into the new year. Reception appears strong thus far with 90 percent of Flixster users anticipating or approving of the film.

Lastly, Fox's Walking with Dinosaurs managed a soft $2.3 million start yesterday and is projected to earn around $7.8 million for the weekend. The CG animation is attempting to counter-program toward families with young children. Unfortunately, Disney's Frozen and Warner's The Hobbit: The Desolation of Smaug are taking the lion's share of that audience going into Christmas week. Dinosaurs could pick up in the days ahead with more families coming out each day, but early word of mouth seems quite weak with a 56 percent Flixster score (down from an 86 percent pre-release anticipation level).

Friday Update #2: Paramount reports that Anchorman 2 is up to a healthy $13.2 million haul after two days of release. The comedy grossed $8.1 million on Wednesday and another $5.1 million on Friday.

Wednesday evening: Sources tell BoxOffice that Anchorman 2 could earn as much as $10 million today (Wednesday) based on early sales reports. That figure includes the previously reported $2.3 million from Tuesday night shows.

By comparison, The Hangover Part III did $3.1 million from Wednesday night shows in May, but Anchorman 2 is off to a solid start regardless. BoxOffice expects the film's proximity to Christmas and late release date change (moved up from Friday) will cause a more weekend-heavy performance for the Will Ferrell comedy. Stay tuned for our official predictions later on Wednesday.