RUSSIA: 'Frozen' off to a Hot Start

Frozen took $2 million from previews in Russia last weekend, enough to put it in second place for the weekend. That $2 million is included in this weekend's $11.1 million official debut for Disney's latest, marking a strong start in Russia as 2013 comes to a close. The big debut for Frozen is Disney's highest premiere for an animated feature in the market: 21% ahead of Monsters University, 82% ahead of Wreck-it Ralph, 69% ahead of Brave, and 8% ahead of Tangled. 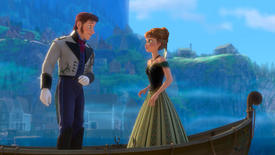 Russian comedy Odnoklassiniki.Ru (Classmates.Ru) came in a distant second place with a $1.7 million bow. The film played in 970 screens for an $1,818 average. Comedy-slash-fantasy-from-a-beer-commercial Ostrov Vezenija, a film about a man stuck in a deserted island with three attractive women, fell from first to third in its second weekend. The Russian comedy took $1.1 million from its first hold to take its domestic cume to $4.2 million.

Captain Phillips didn't find a friendly home in Russia. The thriller has only grossed $3.2 million in the country after two weekends and looks set to sink in the coming weeks after grossing less than $1 million in its second frame.

12 Years a Slave found a positive traction in its limited release debut. The historical drama from director Steve McQueen opened in 390 screens for a $736k total. The critically acclaimed film outgrossed The Hunger Games: Catching Fire over the weekend, with the young adult sequel winding down its run in Russia with $23.3 million in the bank.