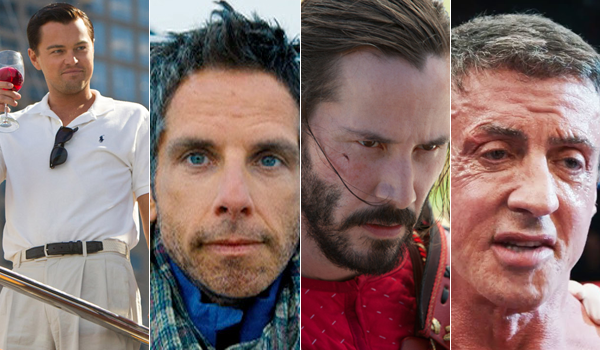 Frozen held up especially well over Christmas weekend with an estimated second place take of $28.85 million. The 3D computer animated blockbuster from Walt Disney Animation increased 47 percent over last weekend's performance. Without adjusting for ticket price inflation, Frozen claimed the third largest performance ever for a film in its fifth weekend of wide release (behind only Avatar and Titanic). Frozen continues to be helped out by a combination of strong word of mouth and the overall lack of competition for family audiences this holiday season. Frozen has grossed $248.37 million to date, which currently ranks the film as the seventh highest grossing release of 2013.

Two more holdovers found themselves in a close race for third place this weekend, with Paramount's Anchorman 2: The Legend Continues just edging out Sony's American Hustle. Anchorman 2 was down 23 percent from last weekend to take in an estimated $20.15 million, while American Hustle was up 2 percent over last weekend to gross an estimated $19.55 million. With respective current total grosses of $83.67 million and $60.04 million, Anchorman 2 has out-grossed American Hustle by $23.63 million so far, but going forward American Hustle should cut into that gap thanks in part to continued awards season buzz. Anchorman 2 is currently running 18 percent behind the $102.58 million twelve-day take of 2010's Little Fockers, while American Hustle is running a very impressive 125 percent ahead of the $26.66 million take of 2010's The Fighter after ten days of wide release.

The weekend's highest grossing new release was Paramount's The Wolf of Wall Street. The Martin Scorsese directed awards season hopeful starring Leonardo DiCaprio placed in fifth with an estimated $18.51 million and has grossed $34.30 million through five days of release. That gave The Wolf of Wall Street a five-day to three-day ratio of 1.85 to 1, which actually represented a less initially front-loaded performance than those of both The Secret Life of Walter Mitty and 47 Ronin (despite the fact The Wolf of Wall Street received a troubling C rating on CinemaScore). It is also possible that The Wolf of Wall Street held up relatively better over the weekend due in part to the film not being the most ideal Christmas Day option for some moviegoers interested in the film.

All four of this weekend's major releases were especially front-loaded towards their opening day performances on Christmas Day. At this point it remains to be seen whether the initial collective front-loading for this weekend's new releases is a sign of lackluster holding power going forward or more a result of Christmas Day performances being inflated for all or some of the four to begin with. Next weekend's respective holds will help answer that question for each of the four films.

Fox's The Secret Life of Walter Mitty debuted in seventh place with an estimated $13.0 million. The Ben Stiller directed remake starring Stiller and Kristen Wiig has grossed $25.59 million in its first five days, which was on the low end of pre-release expectations and places the film's five-day to three-day ratio at 1.97 to 1. With so many other films currently aimed at adult moviegoers, Walter Mitty found itself lost within the middle of the pack, especially as the five-day frame went on. The Secret Life of Walter Mitty received a solid B+ rating on CinemaScore and will hope to stabilize going forward.

Universal's 47 Ronin debuted in ninth with an estimated $9.87 million. The expensive action-adventure film starring Keanu Reeves had performed stronger than expected on Christmas Day, but came back down to Earth as soon as Thursday arrived. With a five-day start of $20.57 million, 47 Ronin had a five-day to three-day ratio of 2.08 to 1, which represented the most front-loaded performance of the weekend's four major new releases. While 47 Ronin opened on the low end of its modest expectations, the film is performing very poorly with its large price-tag in mind. 47 Ronin received a B+ rating on CinemaScore.

Warner's Grudge Match debuted all the way down in eleventh with a lackluster estimated weekend take of $7.31 million. The boxing comedy starring Robert De Niro and Sylvester Stallone has grossed just $13.44 million in five days. That was below expectations and gave the film a five-day to three-day ratio of 1.84 to 1. With so many other choices this weekend, audiences ultimately weren't interested in the nostalgia offered by Grudge Match. Like Walter Mitty and 47 Ronin, Grudge Match also received a B+ rating on CinemaScore.

Disney's Saving Mr. Banks held up very nicely this weekend, especially considering all the new direct competition it faced. The awards season hopeful starring Emma Thompson and Tom Hanks was up 50 percent over last weekend to place in sixth this weekend with an estimated $14.02 million. Saving Mr. Banks has grossed a solid $37.84 million after ten days of wide release and will have a strong chance of continuing to hold up well going forward thanks to strong word of mouth and from skewing heavily towards older moviegoers.

Saturday Update: In what will be a tight race for first place this holiday weekend, Disney's Frozen added $10.25 million to its haul on Friday. The animated box office sensation has tallied $229.8 million domestically to-date, having already surpassed the final grosses of Disney's other in-house animation flicks from recent years. Look for Frozen to bank around $30.3 million this weekend.

The Hobbit: The Desolation of Smaug grabbed another $10.11 million on Friday. The Middle-earth sequel is now projected to earn $30.5 million in its third weekend.

Paramount reports The Wolf of Wall Street brought in an estimated $6.26 million yesterday. The Martin Scorsese-Leonardo DiCaprio film is off to a $22.05 million three-day start since opening on Christmas Day, and should bag $19.5 million for the three-day weekend. Critical reception has been solid (77 percent on Rotten Tomatoes) while audience word of mouth is divisive but generally healthy (80 percent on Flixster at the time of writing). We expect Wolf to have earned $35.3 million in total by the end of Sunday.

Fox's The Secret Life of Walter Mitty posted a $4.54 million Friday. Ben Stiller's dramedy has totaled $17.13 million in its first three days. While critics haven't taken to the film (49 percent on Rotten Tomatoes), moviegoers seem a bit more accepting of the feel-good flick (79 percent on Flixster). BoxOffice projects Mitty will bring in $14 million for the three-day weekend, giving it a possible total of $26.6 million through Sunday.

47 Ronin continued to struggle yesterday with $3.4 million after its post-Christmas 48 percent drop on Thursday. The Keanu Reeves pic has made a soft $14.1 million in its first three days. Although audiences aren't as harsh toward the film as critics are (12 percent on Rotten Tomatoes), word of mouth still appears weak with just 64 percent of Flixster users anticipating or approving of the film so far. BoxOffice projects a $10.3 million three-day weekend, giving 47 Ronin a total of $21 million for its five-day start through the end of Sunday.

Warner Bros.' Grudge Match posted $2.42 million on Friday. The DeNiro-Stallone boxing pic has ringed up $8.54 million in its first three days, while BoxOffice projects a $7.5 million three-day weekend. This is another Christmas opener that critics didn't dig (20 percent on Rotten Tomatoes) but casual moviegoers are a bit more forgiving of (66 percent on Flixster). Grudge will have earned a projected $13.63 million by the end of Sunday for its five-day start.

Friday Update: Warner's The Hobbit: The Desolation of Smaug took in an estimated $10.51 million on Thursday to remain in first place at the daily box office. In general, holdovers and films aimed at family audiences held up much better on Boxing Day than Wednesday's new releases and films aimed at adult audiences did. The Desolation of Smaug increased 13 percent over Wednesday's Christmas Day performance and was up 108 percent over last Thursday. The Desolation of Smaug has grossed $160.45 million in two weeks, which places the film 15 percent behind the $189.70 million 14-day take of last year's The Hobbit: An Unexpected Journey.

Frozen was up five spots and a strong 43 percent over Wednesday's performance to move back into second place on Thursday with $9.11 million. Disney's 3D computer animated 3D blockbuster was up an exceptional 314 percent over last Thursday's performance. Boxing Day is typically a strong day for family films at the box office and that was certainly the case for Frozen yesterday. Frozen continues to exceed expectations in a big way with $219.52 million to date. Given its holding power over the past week, Frozen is set to have a terrific hold over the weekend.

Paramount's Anchorman 2: The Legend Continues held steady in third place with an estimated $7.36 million. The long awaited comedy sequel starring Will Ferrell fell 9 percent from Wednesday and was up 44 percent over last Thursday. Anchorman 2 has grossed an estimated $63.51 million through nine days of release. That places the film 17 percent behind the $76.81 million nine-day start of 2010's Little Fockers.

Fellow awards season hopeful Sony's American Hustle rounded out Thursday's top five with an estimated $6.35 million. The David O. Russell directed ensemble film fell 14 percent from Wednesday. American Hustle has grossed $40.49 million to date and is currently running a very impressive 112 percent ahead of 2010's The Fighter at the same point in its run (though it should be noted that The Fighter still had Christmas ahead of it at that point).

As mentioned, the week's other high-profile new releases didn't hold up nearly as well as The Wolf of Wall Street yesterday. Fox's The Secret Life of Walter Mitty was down two spots and 39 percent from Wednesday to claim sixth with $4.78 million, Universal's 47 Ronin was down two spots and a sharp 48 percent to place in eighth with $3.67 million and Warner's Grudge Match fell two spots and 46 percent to fall to eleventh with an estimated $2.16 million. With all three films falling so sharply from Christmas Day (a day where Walter Mitty and 47 Ronin had both exceeded expectations), it remains to be seen whether any or all of the films will be able to rebound over the weekend. Respective two-day totals stand at a solid $12.59 million for The Secret Life of Walter Mitty, at an underwhelming $10.70 million for 47 Ronin and at a soft $6.13 million for Grudge Match.

Thursday Update: Warner Bros. reports The Hobbit: The Desolation of Smaug held onto first place on Christmas with $9.32 million, boosting its domestic cume to $149.94 million. BoxOffice forecasts a $29.5 million three-day weekend ahead, giving it a $189.2 million domestic cume through Sunday, December 29.

The Wolf of Wall Street took in an estimated $9.15 million in its Christmas launch on Wednesday, earning a "C" CinemaScore. The Martin Scorsese-Leonardo DiCaprio picture is dividing critics and audiences, but BoxOffice believes the film will still earn a strong $23.8 million three-day weekend for a total gross of $39.8 million through Sunday.

Anchorman 2: The Legend Continues grabbed $8.1 million yesterday. That brings the sequel's domestic total to $56.7 million through eight days of release. BoxOffice forecasts $21.3 million for its sophomore weekend, making for an $84 million total through Sunday.

Fox's The Secret Life of Walter Mitty earned a healthy $7.825 million in its Christmas debut. Ben Stiller's feel-good holiday flick is forecasted to bring in $20 million this weekend for a five-day start of $33.8 million.

American Hustle brought in another $7.4 million for Sony yesterday, bringing its total to $34.1 million so far. David O. Russell's awards contender should add another $20.8 million to its haul over the three-day frame. That would bring its overall gross up to $61.2 million by the end of Sunday.

Universal reports that 47 Ronin bagged $7.0 million in its first day, earning a "B+" CinemaScore ("A-" from males, as the studio notes). We expect the film to bank $14.2 million over the weekend for a $26 million five-day start.

Disney's Frozen continued to impress on Christmas Day with another $6.354 million. The animated blockbuster has tallied $210.4 million since its November release. Look for another strong weekend around $27.7 million, bringing Frozen's cume to $246.7 million through Sunday.

Justin Bieber's Believe grossed a tepid $1.25 million on Christmas Day. The superstar's second documentary will likely bring in $5.5 million for the weekend, giving it an $8 million five-day start through Sunday.

Below is our forecast for the three-day weekend's top 13. Stay tuned to BoxOffice for further estimates and updated projections in the days ahead.